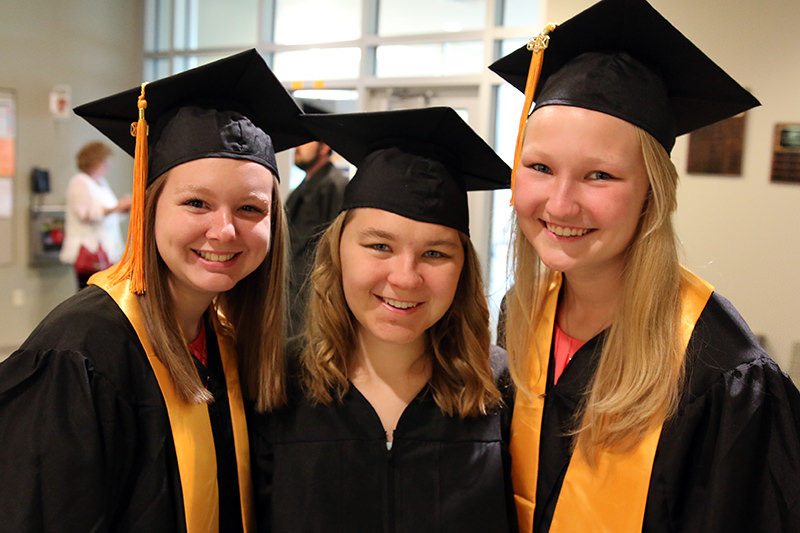 The 47th Annual Spring Commencement was held at East Central College on May 20. The class of 2017 included nearly 500 candidates for graduation.

“It would be very hard for me to stand up here and tell you my story without thinking of all of the times, and all the ways, that I’ve failed, not succeeded,” she said to the crowd of graduates, families, faculty and staff.

Making mistakes is important Mulligan argued. It’s a part of life, and it often allows you to learn, adapt and evolve. You push through it the best you can.

“There are two things that I believe have been the secret of any success I’ve achieved: grit and grace,” she said.

Those two simple words, she explained, allowed her to keep going when a lot of other people might have given up. She grew up in a poor family who lived in a poor county in rural Missouri. Very few people had a college education. Without grit, Mulligan said, she wouldn’t have made it out of her town to pursue her dreams.

Those dreams were inspired by her mother.

“My mother’s story is a story of perseverance.  It’s about working hard and making short-term sacrifices in exchange for long-term gain.  It’s also kind of a classic community college story,” Mulligan said.

It was then that Mulligan’s mother decided she needed a change. She enrolled in a licensed practical nurse (LPN) program.

“A couple years later, she went back to college and became a registered nurse,” said Mulligan. “After I graduated high school, she went back to school again to become a nurse practitioner. Now, she’s the closest thing to a doctor in one of the poorest regions of the country.”

The lessons Mulligan’s mother taught her were invaluable.

“It’s what’s gotten me through the heartbreak of my own failures, helped me see that even the biggest setbacks can be overcome,” she said, “that they just make you stronger. I learned grit by watching my mother, and grit is what’s really been behind every success I’ve ever had.”

She finished her speech with a call to action.
“Be an example.  Be a messenger.  You’ve already shown others that working hard and overcoming challenges can be done.  I ask you to keep it up.  In your work life, in your family life, in your community, keep showing people that, with hard work and determination, you can beat the odds.  You can succeed,” she said.

East Central College President Dr. Jon Bauer conferred associate degrees and certificates upon the graduates. Members of the college board of trustees awarded the diplomas at the ceremony.