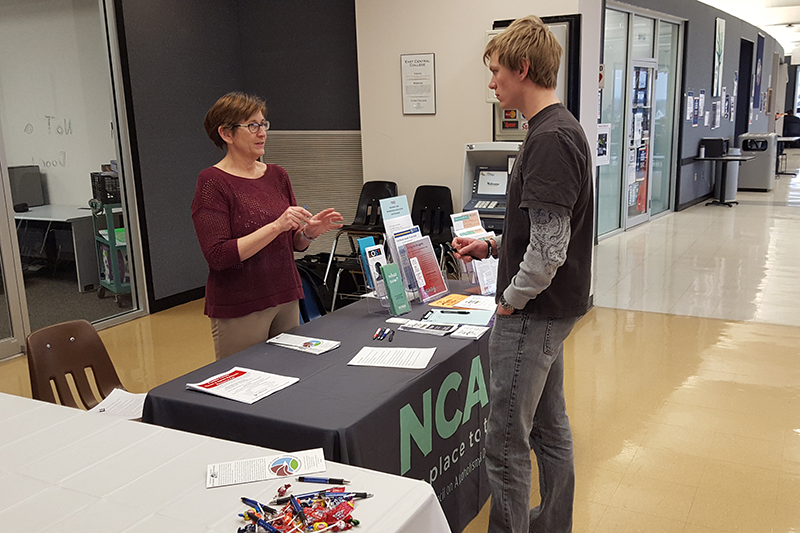 Ping pong balls, candy and root beer – an odd trio of tools to bring awareness to drugs and alcohol. However, it was just that combination that brought dozens of students to the National Council on Alcoholism and Drug Abuse (NCADA) booth in the ECC Cafe at the end of January.

Julie Hook, a prevention specialist for the NCADA, came to campus to spread knowledge about the importance of prevention and awareness with drugs and alcohol in honor of National Drug and Alcohol Facts Week.

Students were invited to take a brief quiz testing their knowledge on drugs and alcohol, and with the points they earned from the quiz, they got to try their hand at “Root Beer Pong.” After Hook revealed the correct answer, she also gave supplemental information in regard to each question.

While the game was there to draw the students’ attention, the real goal was to provide participants with knowledge about the importance of prevention and awareness concerning alcohol and drug use.

“That old saying about an ounce of prevention is worth a pound of cure is absolutely true,” Hook said. “Early intervention is key for preventing addiction. If someone has early warning signs of something going on, we’re more likely to get them the help they need.”

East Central College student Bobbi Francis decided to try her luck at the game. She managed to get ninety percent of the quiz questions correct. She says it’s knowledge that has been with her for a while.

“Two of my uncles have been in and out of jail because they struggle with addiction,” said Francis. “I grew up knowing a lot about their situations and what caused them.”

Francis is currently working on a degree in psychology and social work. She hopes to have a practice of her own in the children’s division.

Along with the game, Hook also brought information and brochures about the services NCADA offers, including free counseling for young adults and adolescents in Franklin County and a free educational program called Youth Mental Health First Aid.

“If we can train people to recognize a mental health disorder or if we all know the red flags and the words to say and the actions to take, we can get them the help they need,” Hook said.

East Central College understands being a college student presents many challenges, and sometimes those challenges can be overwhelming. That’s why we set up ECC Cares – a resource for students and staff to help protect the health and safety of our community. At East Central College, we know maintaining a safe, welcoming environment allows students to focus on their education and get the most out of their time at the college.

Find out more about ECC Cares.