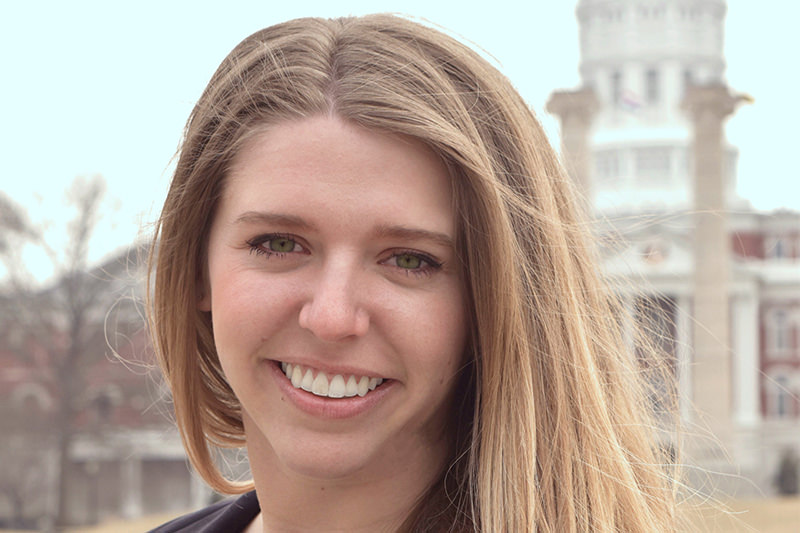 “East Central College provided me with countless opportunities to become a better learner,” said alumna Ginny Ward. “I became friends with dozens of international athletes who educated me on their home country and culture.”

The Walnut Shade native became more curious every day of the world around her. Growing up, she never connected with mathematics or science but was hungry for information. Even though she started college without much of an idea of what she wanted to do with her life, it quickly became apparent.

“During my freshman year, I enrolled in African American literature to fulfill my humanities requirement,” she explained. “That’s when I met Leigh Kolb, and I wouldn’t have even considered journalism if she hadn’t pointed me in the right direction.”

“It is important to show students how being open to new experiences and thinking critically about the world can transform their lives,” said Kolb. “Ginny is the type of student who leaps into every opportunity and has ambition to change the world by telling stories that matter. Journalism was a natural fit.”

Kolb invited Ward to get involved in the East Central College Student Newspaper on campus, The Cornerstone. That’s when she discovered her love for journalism, and she dove right in.

“Alongside the introductory journalism courses I took, I was able to apply critical thinking skills that my instructors had fostered in me at East Central College,” she said. “I learned to ask more questions and become more involved in class discussions.”

Aside from her coursework, newspaper assignments and volleyball practice, Ward kept searching for more opportunities to put her skills to work. She interned at a local news station and the college public relations department.

“By forming relationships with my professors, I was given unique opportunities to build my resume,” she said.

Moving on to Mizzou

Ward graduated from ECC in 2016 and transferred to the University of Missouri, where she was accepted into the prestigious journalism program. She is now working toward her bachelor’s degree, spending much of her time at the Columbia Missourian newspaper.

“Journalists wouldn’t exist without the communities they serve. I want to help make newsrooms more transparent by interacting with readers through social media and community events,” she explained.

She’s already making her mark in the field. Ward recently won first place in the Missourian Press Association awards in the Best News or Feature Obituary. Her touching story was about Brian Simpson, a beloved coach who tragically died in a car accident. Read the story.

Outside of her coursework, Ward stays busy volunteering. She has participated in several service trips to underserved areas of the United States. This November, she will get the chance to lead a service trip to the Women’s Intercultural Center in Anthony, New Mexico. The organization helps women learn English and attain technical skills, higher education or employment. Next semester, she will travel abroad and work at a data visualization internship in Brussels, Belgium.