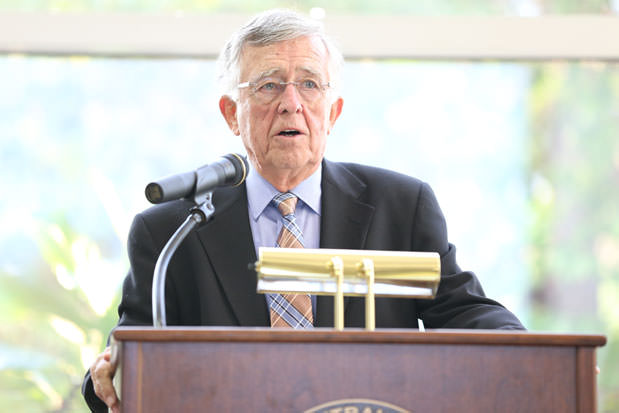 Building to be Named in Honor of Founding President

The East Central College board of trustees unanimously resolved at their March 2 meeting to rename the Multipurpose Building after Dr. Don Shook.  Shook was ECC’s first and longest serving president.

A naming policy instituted in 2009 states that the board may consider naming honors for an individual who had a significant, lasting and measurable impact on the college.  Board president Jim Perry noted that it’s appropriate to honor Shook in this manner based on his long-term commitment to the college.

Shook was hired in August of 1968 to lead East Central Junior College; a position he would hold for the next 18 years.  During that time enrollment grew from 470 when the first classes started in September of 1969 to 2,973 students in the fall of 1986.

“The original trustees hired the right person when they selected Don Shook to be the first president,” noted Jim Perry, president of the ECC board of trustees.  “Don Shook was responsible for hiring the charter faculty and took on countless other tasks involved with the day to day operations of a new institution.  He was instrumental in the growth of the college from its earliest days in temporary facilities through selection of a permanent campus site and the construction of four major buildings.”

Perry stated that Shook was also instrumental in establishing the ECC Foundation in 1975.  “It is truly fitting that one of the early buildings erected on the Union campus be named after ECC’s first president,” Perry stated.  “This is a well-deserved honor.”

“I am very pleased the board took this step and enabled the college and community to honor one of the most influential individuals in the history of ECC,” stated College ECC President Jon Bauer.

Shook worked in higher education for more than 30 years.  He was president at Crowder College for four years prior to being selected as  president at East Central.  He left ECC in 1986 to serve as the founding president at St. Charles County Community College.

A ceremony will be planned to honor Shook and formally rename the facility later this year. The multi-use building currently houses the gymnasium, cafeteria, bookstore, fitness center, locker rooms classrooms, as well as offices for faculty, staff and student organizations.