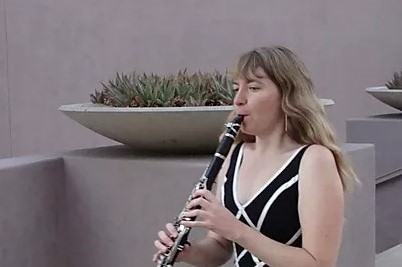 Kelly Austermann, D.M.A., wasn’t sure what to expect when she submitted a video of herself performing “Abblasen,” the theme song of CBS Sunday Morning, to the television program staff.

Austermann, an East Central College music adjunct instructor and professional musician, said a friend from grad school shared with her a video of himself being featured playing the song on a French horn.

The video of her friend was on the CBS Sunday Morning Facebook page about a month ago, she said.

“I saw it and realized that CBS Sunday Morning was asking viewers to submit videos of themselves performing the opening ‘Abblasen’ theme,” Austermann added. “They were featuring one new video every single morning on their Facebook and Twitter pages.”

Because she is a fan of the show, Austermann made the video of herself performing “Abblasen” on the clarinet.

“I’ve always been a fan of the show because it’s not your typical news show.  It focuses on human interest stories like the arts, science, nature, unique attractions, and the list goes on,” she said.

“I decided to make a video because of my love for the show and because I had suddenly found myself with a ton of extra free time while sheltering-in-place.”

Austermann emailed the program a video she made with her cell phone but she did not get a response for about one month.

She noted that she expected the video to appear on a CBS Sunday Morning Facebook or Twitter feed.

“I kept checking the Facebook page each morning to see if they had posted my video,” Austermann said.

On May 28, Austermann received a phone call from a CBS Sunday Morning producer asking her how to pronounce her last name because they were going to air her video on the actual televised broadcast, May 31.

The producer told Austermann that Jane Pauley, CBS Sunday Morning host, was recording at that moment and she needed to know the pronunciation immediately.

“I was in a state of disbelief that they had selected me for national television,” Austermann said. “I had sent the video hoping that I might make just the online platforms of Facebook and Twitter.  I never imagined they would select my video to be aired nationally on the actual show!”

Austermann teaches Music Appreciation, Fundamentals of Music, and History of Jazz at ECC, as well as, St. Louis Community College and Jefferson College.

In addition to being a music educator, Austermann is a performing clarinetist and scholar.

Austermann is also the clarinet instructor for the band programs of the Mehlville, Fox, and Parkway West school districts where she teaches private lessons, coaches chamber music, and provides sectional instruction.