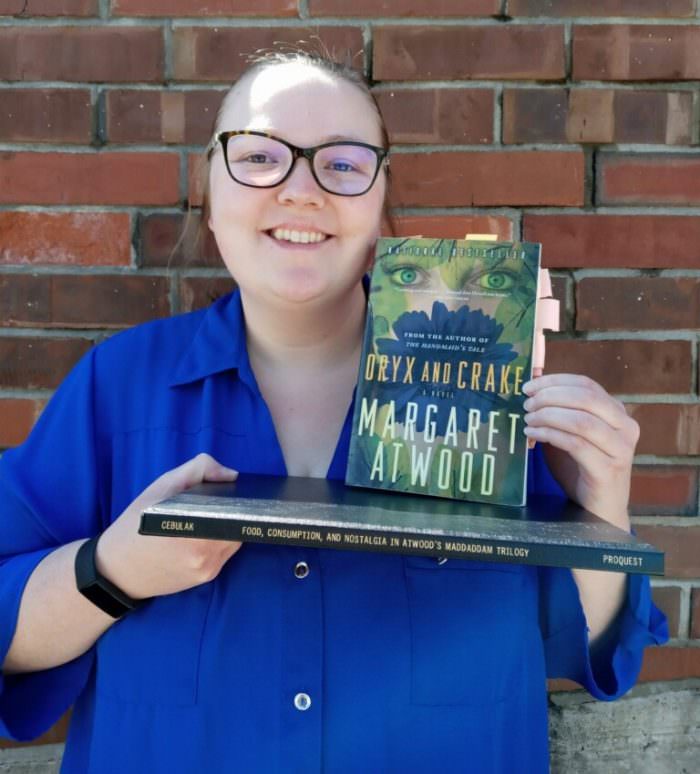 East Central College alumna Brittni Cebulak recently was recognized for her dissertation on Margaret Atwood novels by an international association that celebrates the famous author’s work.

Cebulak, of Hermann, who attended ECC from 2014-16, received the 2020 “Best Dissertation on Atwood and Her Work Award” from the Margaret Atwood Society.

Atwood is a Canadian poet, novelist, and activist who penned, “The Handmaid’s Tale,” “The Blind Assassin” and many more novels, poems and essays.

According to Cebulak, her thesis takes a “food studies and consumption studies approach” in the analysis of Atwood’s trilogy.

“It is about how our consumption habits, framed from nostalgia from the past, and how it connects to our reality,” she said.

According to Cebulak, food and consumption studies is an emerging field in literary studies that is becoming increasingly significant as people confront food shortages, obesity, climate change and environmental destruction.

She added that “The MaddAddam” trilogy is dystopian fiction that depicts humanity bringing about its own destruction through corporate globalism and overconsumption.

Cebulak said the thesis writing process was grueling and time-consuming, but worth it after the project was completed.

“The thesis writing — and re-writing, and re-re-rewriting — process was so difficult emotionally and intellectually,” she said.

“There were times when I just wanted the project to be over so I could forget about it and move on with my life,” Cebulak added. “I didn’t think it could get any better than the feeling of achievement and relief I experienced after passing my thesis defense.”

That’s until she learned her thesis was award-worthy by professional Atwood literary scholars, Cebulak further added.

“Winning the Margaret Atwood Society Award is a complete honor,” she said.

“It was truly validating for all of the time and effort I put into reading, researching and writing my master’s thesis project,” Cebulak commented. “It made me feel like my work actually meant something more besides being a means to the end of getting my master’s degree.”

She said it was a “really great feeling” to learn her work adds to a scholarly conversation of Atwood’s writing in correlation to food studies, environmentalism, consumption and climate change.

Cebulak noted that she developed a deeper understanding of literature though analysis and criticism while enrolled in classes at ECC such as creative non-fiction writing and philosophy.

“In many ways, I think my time at ECC definitely built the foundation for where I ended up going later on in my education,” she said. “I really enjoyed the thought-provoking questions that would arise in Leigh Kolb’s courses during class discussions regarding things like religion, race, gender or sexuality.

“At the time, the fact that these kinds of conversations could take place in a classroom was a completely foreign concept to me,” Cebulak added. “But over time I think I began to embrace the feeling of being uncomfortable in order to dig deeper into myself in an attempt to reconcile my own understandings —and misunderstandings — of how the human condition is experienced by individuals who are both similar and different from me.”