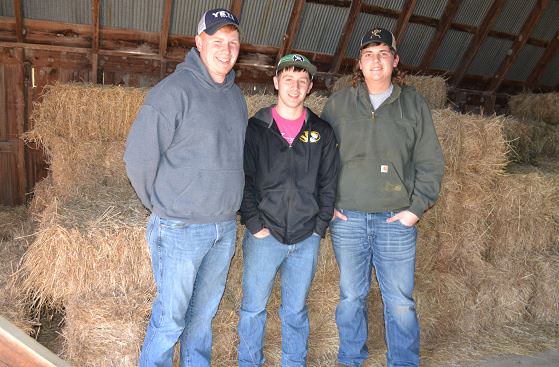 When wildfires scorched through large parts of Oklahoma and northern Texas in early March 2017, one ECC student couldn’t let the tragedy go unnoticed. Dalton Smith, a student at the ECC Rolla center, and his two friends, Seth Morris and Lane McDonald from Rolla High School, drove 1,300 miles to Laverne, Okla., to provide farmers with extra hay and some helping hands.

“We’d seen it on Facebook and agricultural websites,” Dalton said in an article written by Ozarks Farm and Neighbor. “They’d lost hundreds of thousands of animals as two million acres have burned and six deaths have been attributed to the fires as well.”

Smith, Morris and McDonald picked up 150 bales of hay in Arkansas for the trip, where they learned that more than just fire was killing the animals.

“They told us how they would get a fire line cut and be making some headway and then a rabbit, which was on fire, would run from the fireside and set off another fire,” Morris said.  “Many of the animals weren’t killed outright. They would be so injured, so burned but not dead, that the owners and local deputies had to go along just shooting them.”

The livestock that survived will likely cause farmers future problems, however, due to smoke inhalation.

“Their calves may be still born next season or have birth defects as a result,” Smith said.

Despite the losses, the news of traveling help got word out to surrounding areas, spreading awareness about the destruction.

“So little of this had been on the national news and people just didn’t know,” Smith said. “Someone here told me that the awareness we raised about the whole situation out there may mean more than the actual donations we took.”

Smith said that he and his friends planned to take another trip to Oklahoma around spring break, which was in late March, and that there’d be more people and supplies to go around.

According to INCIWEB, the state incident information system, the Northwest Oklahoma Complex wildfires had been 100 percent contained as of March 22, 2017.