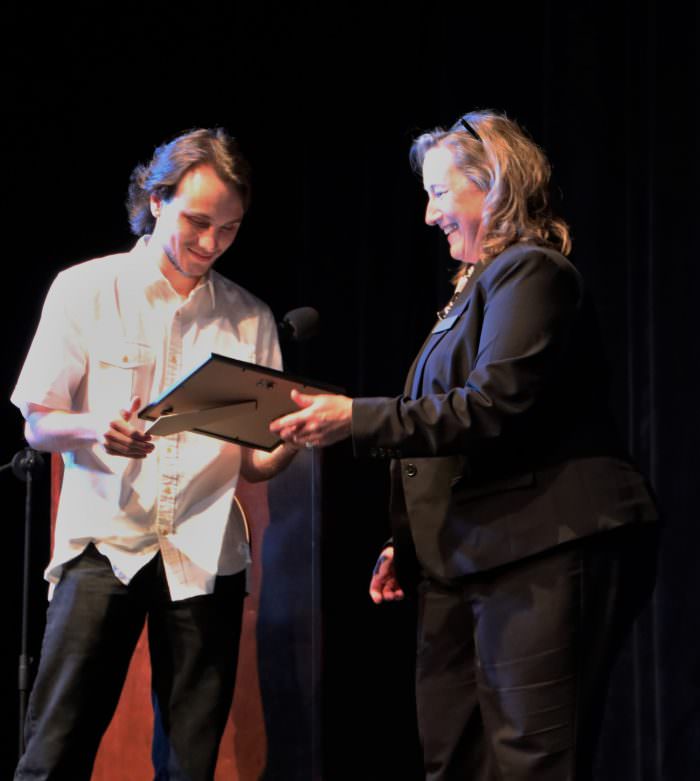 This prestigious award recognizes one student annually who demonstrates exemplary academic excellence during their time at ECC. It was presented by Dr. Robyn Walter, vice president of academic affairs.

The award was presented to Immekus, of Sullivan, May 11 at the Office of Campus Life and Leadership’s Spring 2022 Union Student Achievement Night.

Academic Excellence Award recipients must maintain a minimum of a 3.4 GPA, and they must be nominated by a department chair. All nominations were submitted to the vice presidents for consideration, and one student is chosen.

“Collin has been an exemplary student in his time at ECC. His transcript and GPA illustrates his consistent and impressive class performance,” Kolb said.

“In the humanities classrooms, he was always curious, studious, analytical, and thoughtful.”

According to Kolb, she noticed right away that Immekus has a great interest in, and knowledge of, film.

“His passion for film and film history was one of the first things that stood out about him,” Kolb said. “His knowledge and interest were such that I assumed that he had taken a class in high school or had some other kind of formal academic experience.”

However, she added, he had “independently devoured a CNN series on film history” and was inspired to watch and learn so much, by his first semester in college, he was “engaging in a way that one might expect from a long-time film student.”

“Too often, students who are passionate about a discipline are not always excited about learning more about what they don’t know,” Kolb said. “It has been such a pleasure and privilege to work with Collin over the years, because he wants to read more and watch more so he can engage with the humanities on a deep and holistic level.”