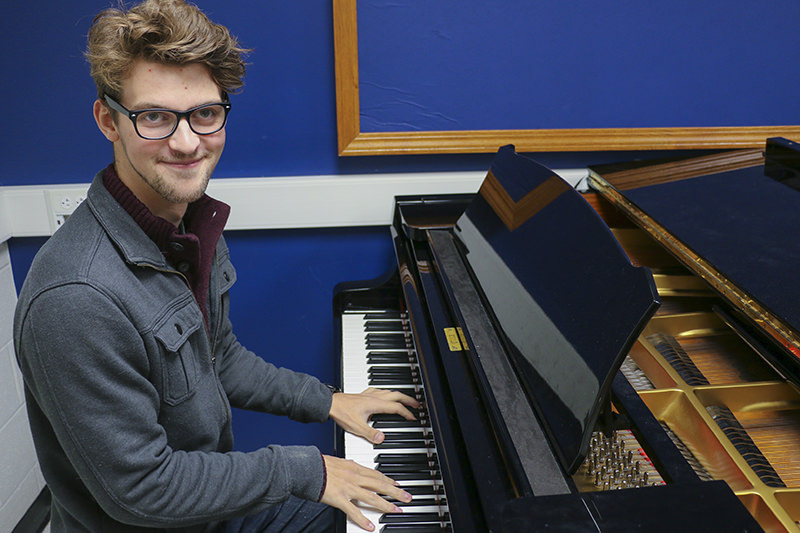 Reflecting back to his second-grade years, Ethan Stahl remembers his love for Nickelodeon.

“The Naked Brothers Band was my favorite show. It was the coolest thing to me back then,” he explained. “It inspired me to form a band with one of my pals.”

After a promising start, the band eventually fell apart due to creative differences. While Ethan didn’t end up a rock star, he did come away from the experience with something more meaningful – his love for piano.

“It’s a place I go in my head, and the escape that it provides is fantastic,” he explained. “I also just love the process of making a piece of music fulfill its potential.”

He’s taken his passion for the piano to East Central College, where he is studying piano performance and music theory. “The nuances of playing the piano have become so complex and full of such detailed characteristics that it has become an entire world for me,” he said.

In November, he got to put his skills to the test at the Missouri Music Teachers Association (MMTA) annual competition. It was his first competitive event, and he admits it started off a bit rocky.

“I didn’t get a chance to soak much of it in,” he said. “I was terribly sick the whole time.”

Despite his ailment, he pushed forward. It was a good thing he did.

Ethan took home first place in the Collegiate Honors Audition Lower Division for freshmen and sophomores. He competed against students from community colleges and four-year institutions across the state.

“When I performed, I knew I played well,” he admitted, “but I made a major fumble at the end. I assumed botched the whole thing. I left with a less-than-lukewarm feeling, which contributed to my surprise at the results!”

Ethan plans to transfer to a four-year university after East Central College and continue his studies in music.