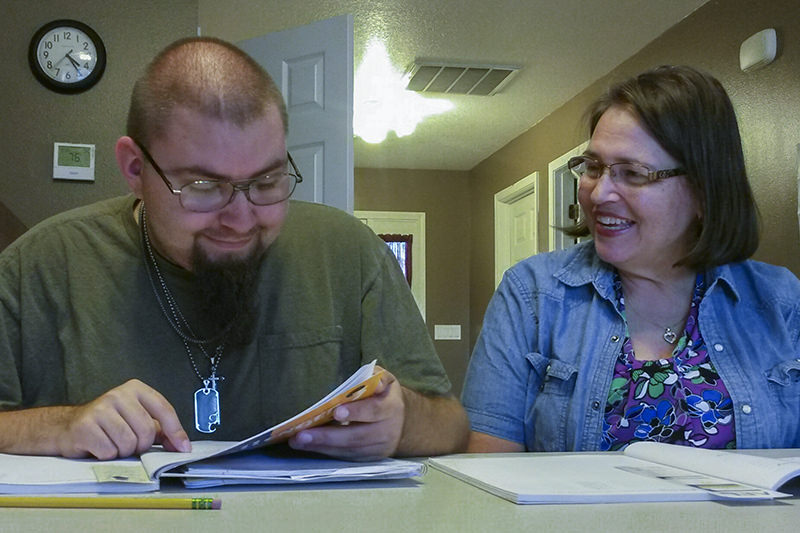 It was July of 2015 when Jesse Berry-McKinnon first walked into an East Central College Adult Education and Literacy (AEL) classroom. He was 20 years old at the time, and he had been unsuccessfully homeschooled.

“He told me that he could barely write letters and numbers and he couldn’t read. He could only write part of his name, but he didn’t know his address, much less how to write it,” said Berry-McKinnon’s instructor Kathy Amsinger.

Berry-McKinnon is unlike most who attend AEL, who need the services simply for review. Berry-McKinnon was being properly taught for the first time with the help of his classroom tutor, Karen Middleton. He had yet to earn his high school diploma.

“With tears welling in his eyes, he told me he was here to learn to read and write so people wouldn’t ever call him stupid anymore,” Amsinger said.

Much like Berry-McKinnon, about 12 percent of Missouri’s population ages 25 and older have less than a high school diploma, or nearly 730,000 people.

“This problem very much exists in Missouri’s East Central College service area,” said AEL Director Alice Whalen. “Franklin County has nearly 13,500 adults who do not have a high school education. Gasconade is close to 2,500, Phelps hovers around 5,600 and Warren has nearly 5,200 people without a high school diploma or High School Equivalency (HSE) Certificate.”

AEL exists to give their students the opportunity to earn their HSE. It also gives students a chance to learn English as a second language.

The importance behind attending AEL classes is not in the numbers, but in the long-term outcome of finishing a high school education. These achievements give way to a chance for people to get their dream job or just a better paying job. The more education an individual has, the more money they can expect to earn. Those with less than a high school education can expect to earn a $17,528 salary, those with an HSE can expect $24,315 and those with an Associate’s degree can expect $38,342.

“Increased education can have a large economic impact for an individual, but also for a community,” said Whalen, “Increased wages impact poverty rates, welfare participation, unemployment, healthcare costs, prison recidivism and tax revenues at both the state and national level.”

Now, just a year and a half later, Berry-McKinnon has made noticeable improvements and was tested near a fourth-grade reading level.

“If this program wasn’t available, he would most likely spend the rest of his life in poverty and ignorance” Amsinger said, “I believe, based upon his determination to follow through on this venture, that he will be a very successful young man.

“Adult Education and Literacy Programs are trying to make a difference in the lives of these students,” said Whalen. “It’s amazing to see how immigrants are learning English and gaining the skills to become productive United States citizens. It’s inspiring to watch a tutor helping a student sound out new words. AEL graduation day is the best day of the year.”

Registration for both the Adult Education classes and the English learning classes is free and goes on year-round. For more information about the dates and times of these classes, call 636-584-6533 or visit www.eastcentral.edu/ael/.