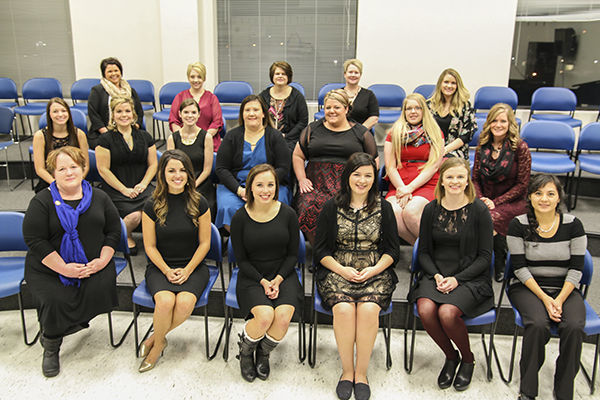 Courtney Smith has juggled her family life with her working life for years. In 2015, she decided to add even more to her plate – she started her journey to become a Registered Nurse through the LPN to RN Bridge Program at ECC. It’s something she realized she wanted to be after a memorable experience when she was pregnant with her son.

“This nurse was spectacular. She was my advocate and my comedic relief,” Smith said, “I can’t say enough about her.”

While the Bridge program is challenging, it caters to working students and students with families.

“It is designed to provide students who hold a Missouri Licensed Practical Nurse license the educational mobility to complete the RN classes in a format that specifically meets their needs,” said ECC Nursing and Allied Health Division Chair Robyn Walter.

On Tuesday, Dec. 13, Smith became one of 18 student nurses in the ECC Bridge Class of 2016 who were awarded their pin for nursing. “This has been a long road coming,” said Smith.

Another student, Kathryn Cervantes, was inspired by her mother to become a nurse. “She brought my siblings and me to the long-term care facility where she worked many times, and I saw how much the residents loved her,” she said.

For Cervantes, nursing has become a family tradition. “ECC taught my two older sisters and me to be excellent nurses. I feel so blessed to have learned from the incredible women that run this program,” she said.

Jessica Steele, meanwhile, has been involved with nursing for the past 13 years. “I became a LPN in 2003 because I wanted to help people, along with my need to feed, house and clothe my two sons,” Steele explained. “I earned other healthcare degrees in 2006, 2009 and 2012. In 2014, my husband and I moved to Rolla where I began my pursuit of a degree to become a RN.”

Steele believes she speaks for all the LPN to RN Bridge Program students when describing the pinning ceremony.

“It’s a tangible symbol of all the hard work and late hours that have guided us on this amazing journey,” Steele said.

« Doughnuts for Donations at ECC-Rolla
Holiday Hours for the Learning Center, Student Services and ECC Bookstore… »