These days, wearing fun and colorful socks is something Miller, of Rolla, enjoys doing. She even dubbed this month, “Socktober,” and she spreads her message with others by giving colorful Halloween socks.

The brightly colored socks she gives away are accompanied by her story of depression and treatment.

It was 10 years ago that the Halloween socks became much more than a fun distraction, but instead a coping mechanism that kept her going day after day.

Miller, a Licensed Practical Nurse (LPN) who has taken many of her prerequisite classes at ECC, recently told her story to the college’s Student Government Association.

In September 2011, she was battling depression and she was in the middle of a suicide attempt when her mother called her.

“One of the biggest and most important parts of my story is that phone call from my mom,” Miller said.

“She just reached out.  She called at exactly the right moment,” she added. “We don’t know when people are suffering, because so many of us hide behind a smile or jokes or laughter.  I don’t know that anyone knew how isolated and alone I felt.”

For that moment, Miller said she was safe, but still battling depression.

The next day she went to a store in Columbia where she purchased a variety of Halloween, her favorite holiday, socks.

“I didn’t realize that those socks were giving me something to look forward to,” Miller noted. “I didn’t recognize that it was a very strange coping skill for my depression — I think I just felt like a very strange girl, who found a way to smile every day.”

The colorful, fun Halloween socks helped her get through a difficult October 10 years ago, Miller said. She then planned a Thanksgiving for the residents of the nursing home where she was working.

According to Miller, it was around Thanksgiving 2011 that she moved back home to seek treatment and her mental health improved. 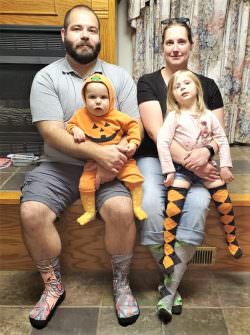 Now she is married with two children and using the same tool she used for hope, Halloween socks, to let others in the community know that help is out there.

“I want to help people as much as I can, and I think a lot of that starts with helping people mentally,” Miller said.  “It’s hard to want to get better from an illness if you’re not feeling up to it mentally.

“I’ve seen a lot of people be more compliant with treatment with some gentle nudging to take care of their mental health first.”

Miller initially kept her Halloween sock tradition to herself, but after a few years, she began spreading joy and helping others.

“The biggest reason I started deciding to share the message though, is that someone I cared for very much was struggling with addiction,” she added.

“I know he must have had a great deal of depression, and I think I saw an opportunity to try to help him as well.  I was becoming more aware of my own feelings and emotions and recognizing what Socktober really meant to me.  I thought it could help him feel better too.”

Miller’s mission to help grew, and she began mailing socks randomly along with her story and what the socks mean to her. The mailing also includes the phone number for the suicide prevention hotline and a P.O. Box number where people can reach out to her.

She also hands out socks to people around town, and this Thursday, ECC Campus Life and SGA will be giving socks to students during a Halloween costume contest. Along with the socks will be a printed paper with Miller’s story.

Halloween socks and Miller’s story will be available from 11 a.m. to 2 p.m. at the Café Central atrium at the Union campus.

Today, Miller’s children, Marcia and Jack, and her husband, Ben, assist with the Socktober mission. Miller added that her husband is taking information technology classes at ECC in Rolla.

“My daughter loves Socktober and helps me pick my socks out.  My son has a few pairs and I put them on him sometimes,” she said. “My husband sat down and helped me package up socks this year.  He’s a wonderful guy, and incredibly supportive.”

This year Miller will give out 434 pairs of socks, including those that will be distributed at ECC.

“This is a huge number in comparison to past years and I am grateful for all who have helped with my endeavor,” she said.

Miller added that she is working with The Rolla Mission to give socks and share her story with those who are assisted by the organization. The goal, she said, is to “promote inspiration, wellness, and providing them with a small comfort going forward in their journeys.”

There is a GoFundMe account set up to help Miller with expenses for Socktober. To donate or learn more, people can visit the page at https://gofund.me/b12f17fe.