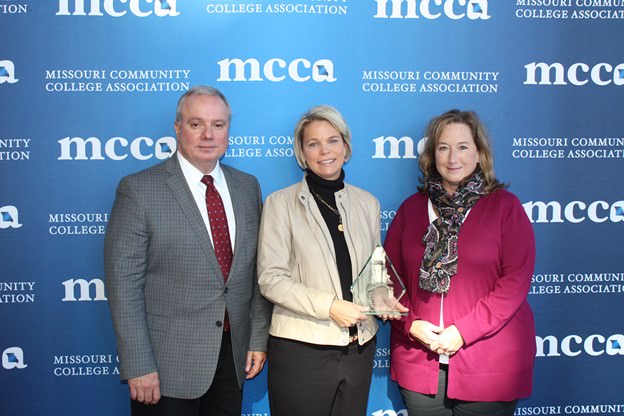 Tom Fitts’ approach to instruction was to always think outside of the box and challenge his students.

That’s according to his colleagues and peers at East Central College who nominated the EMS Program Coordinator for the Missouri Community College Association Governor’s Award for Excellence in Teaching for the College.

“Tom was able to acquire a used ambulance to simulate learning outside of the classroom,” the award nomination form reads. “He is able to set up scenarios on campus to simulate real-life situations such as cardiac arrests at the sports fields or accidents out on the prairie. Students are then able to evaluate and treat those patients in the field just as they will in real life. He brings the classroom to life in many ways.”

Additionally, “During his time at ECC, Tom has not only excelled in the classroom but also as a member of the ECC community on and off campus,” his nomination reads.

The award was presented during the MCCA’s annual conference Nov. 10-12. Unfortunately, Fitts passed away Wednesday, Nov. 10, after battling cancer.

Fitts became the EMS coordinator at ECC in January 2002 where taught courses in the nursing program as well.

In addition to his work at the college, Fitts was part of the Washington and Meramec Ambulance Districts.

While at ECC, he served as president of the ECC faculty association and the college’s National Education Association. Each year, Fitts attended the Committee on Accreditation for the EMS Professions (CoAEMSP) conference for professional development. For several years, he offered refresher Advanced Cardiovascular Life Support (ACLS) courses to help fund an ECC student scholarship.

“Tom’s dedication to his program and ECC is evident. He is an ambassador for ECC and the EMS community.”

He is survived by his wife, Janet Fitts; and three children, Megan, Adam and Jacob.

In 1984, Fitts received his Emergency Medical Technician license while attending nursing school. He began working for Meramec Ambulance District and volunteered for the Eureka Fire Department.

After nursing school, he worked as a cardiothoracic nurse at St. Luke’s Hospital and then in the emergency room at St. Luke’s Des Peres Hospital, where he was head nurse. He also worked at Mercy Hospital Washington.

He served as the Missouri State EMS testing coordinator for many years. As an American Hospital Association (AHA) instructor for all disciplines and state Prehospital Trauma Life Support (PHTLS) coordinator, he impacted innumerable patients’ lives through educating for understanding. Tom’s impact on EMS and nursing education has been unmeasurable.