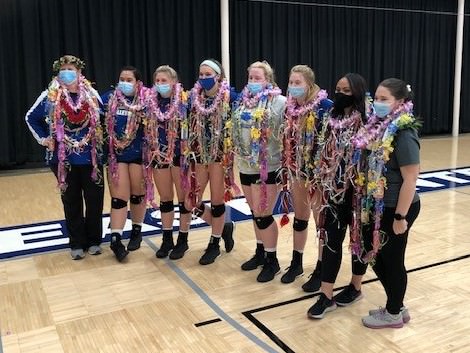 Every player brings their unique talents to an athletics team.

And for three Tongan American players on the East Central College Volleyball Team it is no different — they not only perform on the court, but they also share their traditions.

“I came to Missouri because I received a scholarship for volleyball,” Lutui said. “And I’ve never been so, I took the chance.”

Along with being on the same volleyball team and being from the same state, the girls also knew each other before coming to ECC.

“We all played at the same club in Utah, Club Union.” Mo’ungaafi said. “I played with Teena my first year there and then I played with (Leanata) last year.”

In addition to sharing court time in their home state, the trio also shared Tongan traditions. With the season coming to an end, the girls made traditional leis for their teammates for their last game.

“We made candy and flower leis for the sophomores and the coaches. The Lei is a common symbol for celebration, honor, friendship, greeting or love,” Lutui said.

Although the tradition of giving leis is new to their teammates and the coaches, the girls’ heritage consists of celebrating many things in that fashion, according to Mo’ungaafi.

“Lei’s have different meanings to it. For example, if one were to graduate school, then candy leis, money leis, flower leis, and any type of lei you could think of is what we would make by hand and lay it on them, she said. “and that’s kind of our way of saying we’re proud of your accomplishments and this is a gift from us.”

“The leis just signify the accomplishments one has been able to finish — it’s a celebration of one’s affection to another as well,” Mo’ungaafi added. “For example, if a guy were to take a girl to a school’s dance, he would come to the girl’s house with a lei and lay it on her as a sign of affection, appreciation and thanks.”

With this unique tradition being brought to the team, everyone embraced this form of celebration.

Mo’ungaafi said the leis were given to the players, coaches, including head coach Lisa Mathes-Peters; Athletic Director Jay Mehrhoff, and the parents as well

“Without them we wouldn’t have been able to compete,” she said, adding that initially the recipients were “astonished, amazed and shocked at the same time.”

Although their teammates and coaches didn’t expect the gift, it is commonplace in the Tongan culture.

“I guess you could say that it was a surprise, but for us it was normal and that’s what we normally do, Mo’ungaafi said.

“All in all, the leis represent affection, appreciation, and thanks from the person who is giving the lei and it shows with how the lei looks, the hard work and hours put into making that lei or multiple leis for one,” she added.

As with many new teams at the start of the season, it takes time to gel with teammates as they learn to work together. The ECC volleyball team figured it out quickly and ended the season with a 13-6 record and as Region 16 DII Champions.

“I’m not going to lie,” Leakehe said, “the beginning of the season was pretty rough for us in my opinion.

“Us girls were still trying to learn how to play with each other, but as we played more games and had practice every day, we learned where everybody on the court works best and all in all, we made new friends when we weren’t on the court.”

As their volleyball career at ECC ends, the three Tongan Americans will carve out new paths.

“My plans are to maybe get transferred to another school for volleyball,” Leakehe said, “but if that doesn’t work out then I plan on going home to work and start on my ‘adult’ life.”