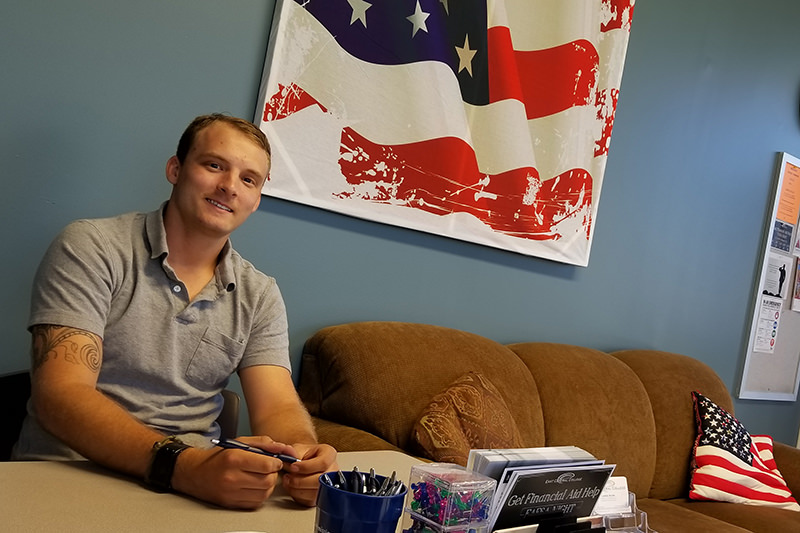 Joshua Carico left the Marine Corps in 2017 and enrolled at East Central College soon after.

Carico hopes to transfer to a four-year college and eventually become a conservation agent. He admits the transition from the military to civilian life has come with its share of struggles.

To help students like Carico with the transition, East Central College recently created a dedicated space for veterans to study, relax or just hang out.

“I’ve been wanting to create a veterans lounge for several years,” said Lorrie Baird, financial advisor. “We really just never had space for one.”

Space opened up over the summer in the Donald Shook Student Center, and Baird jumped on the opportunity. The next challenge was furnishing the room.

“We received donations from staff, friends, and family,” said Baird. “The support has been amazing.”

The lounge has a refrigerator, snacks, coffee pot, TV, couch, desks, and a computer.

“We have nearly 120 veteran students at East Central College, and we wanted to give them a truly special place to call their own,” said Baird.

The word is spreading, and more veterans are utilizing the space.

“It’s been great to meet other veterans on campus,” said Carico. “It’s good to talk to other people who’ve shared a similar experience to you.”

“I think it is a great idea,” said veteran student Phillip Brown. “It’s heartwarming to see all the donations that have poured in to give us our own space.   It gives veterans a place to go and relax and be with like-minded individuals.”

The veterans lounge will hold an open house on Friday, November 10 in honor of Veterans Day.