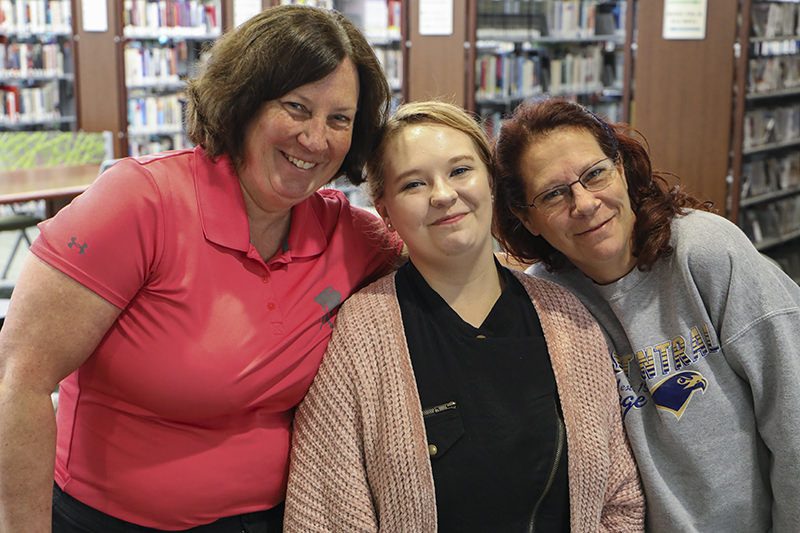 Marcy Baker first started college in 1985. She was the first member of her family to attend.

“I was on my own,” she said. “I had to figure out how to enroll and pay by myself. I was very shy back then, so I never asked anyone for help.”

While she had managed to save enough money for tuition, bad habits started affecting her college experience.

“I skipped classes a few times,” she admitted. “I ended up with some bad grades and even dropped a class or two. I regretted it later when I had to pay to retake the classes and work to get my GPA up!”

A few years later, Marcy had a son. College was put on hold. She enrolled again in 1991 and 1995. Each attempt in jumpstarting her educational journey was derailed by unfortunate life circumstances.

“I never gave up my dream of getting a college degree,” she said. In 2012, she started taking classes once again at East Central College. “I came back to show my children that it is never too late to chase after your dreams.”

Nearly 35 years later, Marcy will finally walk across the stage – earning her associate of arts in the process. She won’t be alone. Her sister Kathy Minks will be at her side.

“Better late than never I always say,” Kathy explained jokingly. “I am beyond excited to graduate with my sister. We definitely did not plan it this way. It just happened!”

Kathy, like her sister, had enrolled in college before. She had taken many general education classes a few years ago, but didn’t complete a degree.

“I had to return to work,” she said, “but I didn’t give up on college. I kept a close eye on online offerings in order to work and still complete my degree.”

She became an East Central College student once again in 2018. After a year of hard work and dedication, Kathy will earn her associate of arts with an emphasis in business administration.

As Marcy and Kathy are handed their diplomas on May 11, one of their biggest cheerleaders will be in the crowd watching – Kathy’s daughter Gwen. She’s an East Central College student too, though she’ll have to wait until next year for her graduation.

“I’m extremely proud of them both,” explained Gwen. “Not only did my mom raise me as a single parent, but she also showed me that you can do whatever your mind wants to achieve. She also taught me the importance of constantly growing as a person and expanding your horizons.”

Marcy and Kathy started this journey years apart – taking different paths along the way. On May 11, they will get to finish it together.

“I’m very proud of my sister and myself for graduating college,” said Marcy. “It was a dream I wasn’t certain would happen when we were teenagers.  Now here we are – 50 year-old women getting college degrees!”

“They both show such strength and determination and have worked hard for years to get to where they are now,” Gwen added. “I have wonderful role models and bigger shoes to fill as I transition into adulthood.”