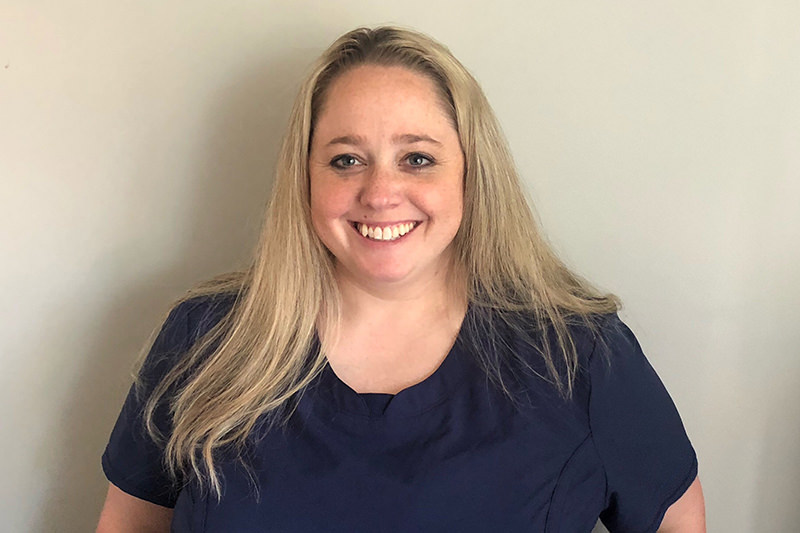 She started college when she was 29 years old. For nearly three years, she took online classes to take her general education requirements.

“I couldn’t really leave home,” Angela Trentmann explained. “I had to take care of two kids while my husband worked full time.”

After her children were finally old enough to attend school all day, she made her move.

“I immediately enrolled in the East Central College nursing program,” she explained. “It was close to home, and I could actually afford it!”

During her first semester, tragedy struck. During one of her nursing classes, Angela got a phone call. Her house was on fire.

“My husband had just recently had back surgery and was inside when it started,” she said. “He was only able to get out with the help of a complete stranger pulling him out of the window.”

The house was a total loss. Everything her family had owned was suddenly gone.

“One of my first thoughts was ‘oh no, all my nursing books are gone,” she recalled.

“When I heard about what happened, I called Angela as soon as I could,” said Nancy Mitchell, Dean of Health Sciences. “I told her not to worry about her books. We would take care of it.”

Two days later when Angela returned to class, a stack of new books was waiting for her. That wasn’t all.

“Throughout the next few weeks I received donations, gift cards, clothes and toys for my children,” Angela said. “It had all come from faculty, staff and my fellow classmates. What happened to my family was a disaster, but the generosity and love we received after the fire was incredible.”

Once the dust had settled, Angela continued pushing forward toward her nursing degree. She admits it wasn’t easy.

“I had many moments when I thought I couldn’t get through it and wanted to quit,” she said, “but there was someone always telling me I could do it!”

Her persistence paid off, and she graduated in 2019. She is currently using the skills she learned at East Central College in the Critical Care Unit at Missouri Baptist Hospital in Sullivan.