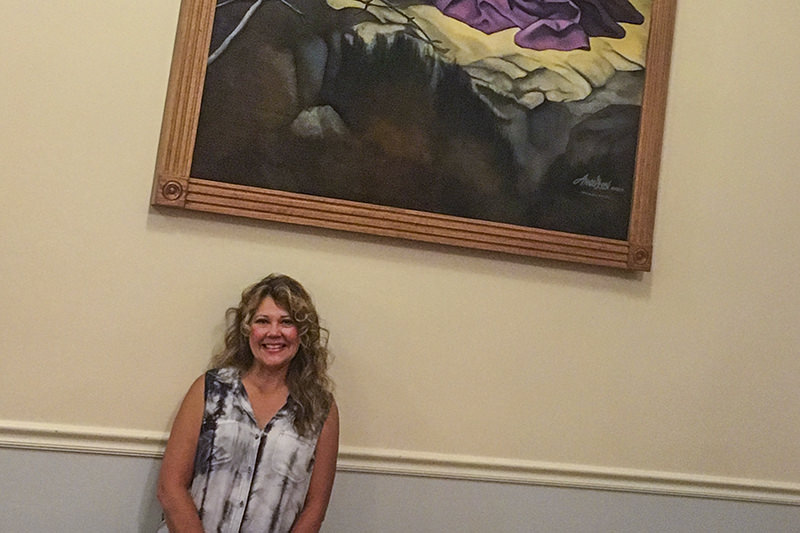 In 2015, East Central College Art Instructor Annette Green received a call from a friend at St. John’s Lutheran Church in Beaufort. He knew she was a skilled artist and had a project she might be interested in.

“The church had been remodeled years earlier,” said Green. “In the process of removing the old wallboard, they found hidden frescoes underneath.”

The church tried to figure out who had painted them or when, but they came up short.

“They were badly damaged,” said Green. “The church tried to find an artist to restore them, but it was just too costly.”

So, the project was scrapped. Some 22 years later, the church decided to reproduce the paintings. Green was excited to be a part of the recreation.

“As a young artist, I had grandiose ideas of painting the inside of a church, similar to Michelangelo,” she said.

When the East Central College alumna started the project, she noticed the paintings looked oddly familiar.

“After a little research, I found the original works of art were done in the 1890’s by two German artists,” said Green. “One is actually hanging in a Lutheran church in New York City courtesy of the Rockefeller family.”

She documented the entire process along the way and presented it to fellow faculty this fall.

While the church may never know who painted the versions in Beaufort, they will certainly know where the replacements came from.

“When the paintings were dedicated, I was very humbled and appreciative of the opportunity that was given to me,” she explained. “I wish to continue painting in the classical tradition, reviving and using the materials and techniques of the old masters.”