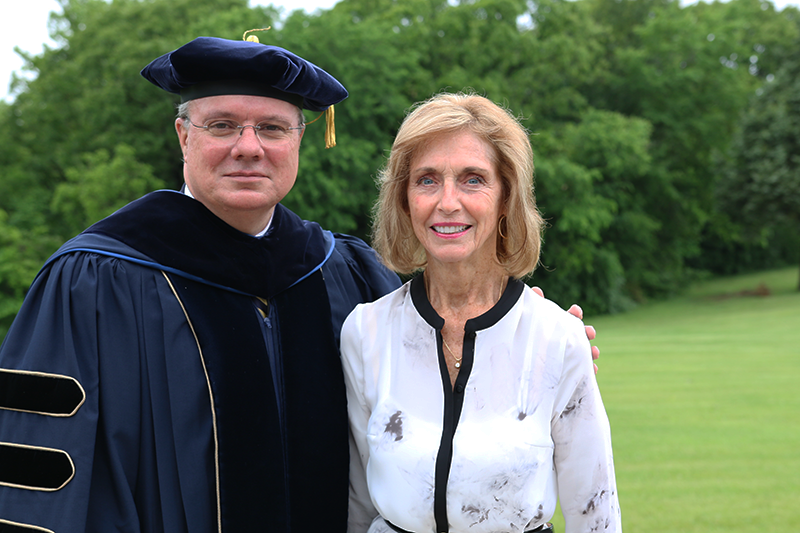 It’s hard to find a corner of the New Haven community Audrey Freitag hasn’t touched. During the week, she’s often spotted at the senior center helping serve meals. On the weekends, you might see her volunteering at a local church serving meals to people in the community at the “Friendship Plate.” Not only is she an active board member for Habitat for Humanity, she played a part in the first home ever built in the community. In fact, she still checks up on the family to make sure they are doing well.

“Habitat for Humanity does so much good stuff,” she told The Senior Life Times in a 2015 feature story about her life. “They’re trying to help people stand on their own two feet, they’re not trying to take care of somebody. It’s like, ‘Let us help you get started.’”

Audrey’s endless compassion, selflessness and determination are felt in everything she does, and it’s why she was chosen as the 2017 East Central College Outstanding Alumni. The award is presented annually to honor an ECC graduate who has used his or her education and been of service to the community.

Helping others has always been a calling for Audrey. In 1958, Audrey attended the Deaconess School of Nursing. A year later, she received her LPN from the Missouri State Nursing Association.  However, shortly after getting her license, a young farmer swept her off her feet. That man, Wayne, later became her husband of 57 years until his passing in 2015. Audrey decided to put her career on hold to raise a family with Wayne. They ended up having four amazing children, who now have 13 children of their own, at the family’s dairy farm in New Haven, Missouri.

Some 17 years later, Audrey went back to her love of nursing. She found a position at St. Francis Hospital in Washington (which later became Mercy Hospital), where she found her calling in behavioral health. As her children started to graduate from college, she started to reflect on her dreams and aspirations. Audrey realized she wanted continue her education with a bachelor’s degree in nursing with the reward of becoming a Registered Nurse.

East Central College, having a partnership with Central Methodist University, was right in her backyard. She enrolled in classes at ECC more than three decades after she started her journey in nursing, and it wasn’t easy.  Audrey had to start from scratch – taking history, English, science and math – to get into the nursing program. Her hard work paid off. She graduated in from ECC in 1993 and finished her degree at CMU in 1996. She continued her career with the Mercy Hospital system until her retirement in 2013.

Throughout her entire life, putting other people’s needs first has been her priority. For more than two decades, Audrey has traveled to Honduras to help those less fortunate than herself. Through the Washington Overseas Mission, she has used her East Central College nursing skills to perform women’s wellness checkups, assist with dental procedures, help distribute medicine and provide care for people thousands of miles away.

“We go down there and we meet the neatest people,” she said in The Senior Life Times interview. “These people don’t have any access to medical care, and we do what we can for them.”

Locally, she serves on the East Central College Foundation Board, is an active member in the Philanthropic Educational Organization (PEO), New Haven Preservation Society, Mercy Auxiliary and a former member of the St. Peters Church Council. She somehow still manages to find time to attend R-2 school board meetings, volunteer at the Mercy Cancer Center and Prison Ministry and cycle in her free time with the “Folks on Spokes” group!

Dr. Jon Bauer made the presentation at college commencement ceremonies held Saturday, May 20, at the campus in Union.