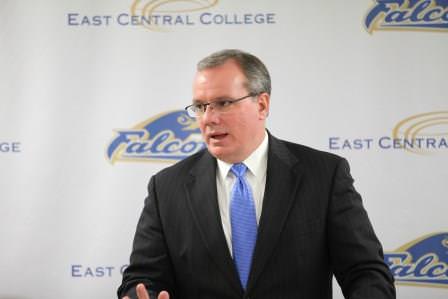 Bauer succeeds Dr. Ron Chesbrough, president of St. Charles Community College, and will provide leadership for the association as it represents community college interests across the state.

Among these interests are the priorities outlined in the association’s state legislative agenda—equity funding for community colleges, increased funding for all of Missouri’s public colleges and universities, funding for the A+ scholarship program and support for workforce training.

Bauer has been a member of the association’s governing board since he became president of East Central College on July 1, 2012. He is a product of Missouri’s community college system, graduating in 1984 from Jefferson College in Hillsboro.

He holds a bachelor’s degree from Southern Illinois University in Carbondale, an MBA from Fontbonne University and earned his Ph.D. from the University of Missouri-St. Louis.

As president of East Central College, Bauer recently completed work as a member of the Missouri Coordinating Board for Higher Education (CBHE) steering committee for the new Blueprint for Higher Education.  He also serves as a peer reviewer for the Higher Learning Commission.

Bauer started at East Central in 1995, as director of public relations. He assumed additional responsibilities in 1999 as the director of college relations.  In 2001 he was promoted to dean of enrollment management.  He spent one year as dean of ECC’s satellite location in Rolla and served as chief financial officer from 2005 to 2012.

Before joining the ECC staff, Bauer was assistant news director and news director at KLPW Radio.  He then went on to serve as editor of the Union Missourian from 1989-1995.

He has served on the boards for Mercy Health East Communities in St. Louis, Mercy Hospital Washington, the Washington Civic Industrial Corporation & 353 Redevelopment Corporation. He is past president of the Washington Area Chamber of Commerce board of directors and the Washington Public Library Board.

The Missouri Community College Association is a statewide organization through which Missouri’s community colleges work together to advance common agendas.  MCCA provides advocacy, education, information, and networking opportunities in service of the state’s 5,700 community college faculty, staff, administrators, and trustees.   More about MCCA’s legislative priorities can be viewed on their website at www.mccatoday.org.