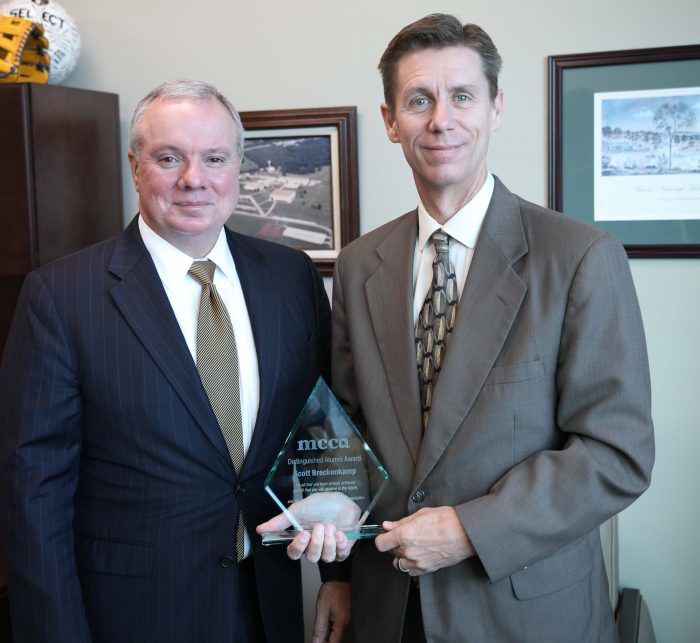 East Central College alumnus Scott Breckenkamp recently was recognized with the Distinguished Alumni Award by the Missouri Community College Association (MCCA) for his contributions to the college and his community.

“Scott truly exemplifies what it means to be a leader in his field and community,” Bauer said. “He is a very well-deserved recipient.”

Breckenkamp, Washington, is the First State Community Bank (FSCB) president of the Washington and Pacific markets.

He attended ECC in 1988-89 and earned an Associate of Arts Degree before transferring to Missouri State University, Springfield, where he earned a Bachelor of Science Degree in finance.

Breckenkamp paid his way through college by working part-time jobs during summer months and throughout the year while attending classes.

He was chosen as the 2020 East Central College Outstanding Alumni for his professional accomplishments and service to the community. The award is presented by the ECC Foundation.

According to Bridgette Kelch, ECC Foundation executive director, the award is presented annually by the ECC Alumni Association to honor an ECC graduate who has used his or her education and been of service to the community.

“Scott is a wonderful example of an ECC graduate who has gone on to become a successful community member and volunteer,” she said.

After receiving the College’s alumni award, Breckenkamp applauded ECC as an affordable option that enabled him to begin his education beyond high school.

“I had to pay for my own college, so this allowed me to stay local, live at home, continue to work and take the courses I needed,” he said.

ECC played a vital role in his education because he still could work to pay tuition while taking classes. It was easy to then transfer to MSU to attain a four-year degree.

After graduating from MSU, Breckenkamp worked at US Bank in Washington. He also had been employed at the Bank of Washington, US Bank in St. Louis and Merrill Lynch.

He noted that his former economics teacher and advisor at ECC, Brian Hickey, helped guide him toward a finance degree and set him down a career path in finance/banking.

Breckenkamp is married to Julie Pogue Breckenkamp and they have three sons: Tyler, Connor and Spencer.

He has been very active in the community and in the county by serving on the ECC Foundation Board, Mercy Hospital Board of Directors in Washington, Washington Rotary Club, Franklin County Area United Way Board and Washington 353 Corporation.

Breckenkamp also has coached Little League football for one of his three sons and coached basketball at Our Lady of Lourdes. He is a member of the Knights of Columbus and Borgia Athletic Association and has been chairman of the Borgia Dinner Auction. He is a Washington Town and Country Fair volunteer, among many more volunteer jobs.