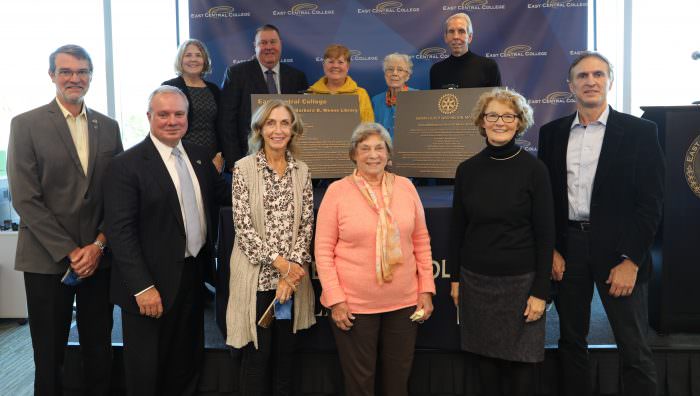 Donald Means was a charter trustee, and his service goes back even further when he and several others worked diligently to bring the college into existence in the 1960s.

“In this space, scholars, inventors, and creators will learn, will explore and will carry on the knowledge they have received in this place. In this institution,” said Charlotte Nordyke, daughter of the Means.

Nordyke and the Means’ other children, Rhonda Lasley, Douglas Means, Eric Means; and Don’s sister, Alberta Hitchings; were at the library for the dedication ceremony.

“Books hold the most secrets of the world and the most thoughts of men and women,” Nordyke added. “Our parents loved books and were lifelong learners. It is so fitting that this library will bear their name.”

She noted that the work her father did in the community and for ECC was fully supported by her mother.

“Behind every man is, as some would say, an even greater woman, and my dad would totally agree,” Nordyke said. “Our parents were a partnership, unit, a team.”

Two plaques will hang in the Donald R. Means and Barbara D. Means Library — One from ECC recognizing the Means’ service to the college and the formation of the college district, and a second from the Washington Rotary, an organization in which Donald Means was heavily involved.

In February, the ECC Board of Trustees voted unanimously to name the facility after the couple. Donald means passed away in August 2020.

“After his passing it was clear to the board and to me, that his contributions to the college needed to be memorialized in a significant way,” Dr. Jon Bauer, ECC president, said. “The library is an opportunity to honor his service. “

“Our community prides itself on civic leadership, and we need look no further than Don Means as exemplar,” Bauer said. “His life and career were marked by devotion, integrity and service.”

“No individual provides this level of leadership and service without support at home,” he added. “This was certainly true of Donald and Barbara Means.”

During the ceremony, Bauer announced the establishment of the Donald R. and Barbara D. Means Faculty Innovation Award, which recognizes and encourages innovation in the classroom.

“I can think of no better tribute than to recognize innovative teaching that goes on at East Central,” he said.

Bauer noted that Means Library houses the Harrison M. Eaton Children’s Literature Collection. Eaton also was one of the organizers of the college district and went on to serve on the college board of trustees for more than 12 years. 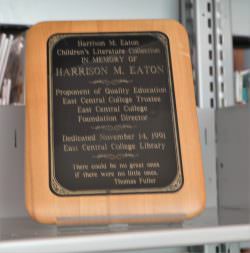 Means was a founding member of the Washington Rotary Club, which formed in 1970. He served as president of the organization for two terms.

“Don was a leader, mentor, motivator and supporter,” John Vietmeier, Washington Rotary Club, Past President said. “Don embodied the motto of Rotary — service before self.”

Vietmeier added that Don Means had tremendous support from his family, especially Barbara.

“It takes a team to succeed and Don and Barbara were a team,” he said. 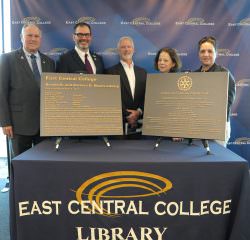