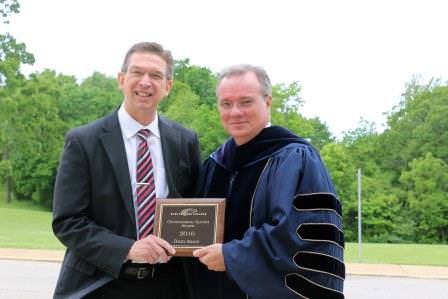 Dave Arand of Union was named recipient of the East Central College Outstanding Alumni Award for 2016.  The award is presented annually to honor an ECC graduate who has used his or her education and been of service to the community.

Dr. Jon Bauer, ECC president, made the presentation at college commencement ceremonies held Saturday, May 14, at the campus in Union.

A 1973 graduate of Union High School, Arand began his post-secondary education that fall at what was then East Central Junior College.  He was a member of both the Rebel basketball and baseball teams during his two years at East Central.

After graduating with an Associate of Arts degree from East Central in 1975, Arand transferred to Southeast Missouri State University in Cape Girardeau.  He obtained his bachelor’s degree from SEMO in 1977, and went on to earn his law degree from Washburn University.

Arand has spent his entire life working and serving the community. As a young man, his leadership and service were recognized when he received the Outstanding Young Man Award from the Jaycees. That award was based on countless hours working with the Union Kiwanis, Knights of Columbus, Union Board of Alderman, East Central College Foundation, Union High School Booster Club, and Immaculate Conception Parish.  He spent many hours coaching youth soccer, baseball, softball, and basketball. 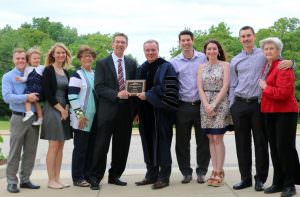 While staying active in the community, Arand has built a reputation as a fair and honest attorney. His private law practice has grown over the years, but he always finds time to use his legal knowledge to help out local organizations with advice and assistance.  He also serves the communities of Union and St. Clair as city judge. His fairness, along with compassion and respect for the law, has made him successful in those positions.

Arand continues to give his time to organizations in the area. He is a past president of the Union Kiwanis Club. He is a member of the Knights of Columbus, and serves on the finance committee at Immaculate Conception Parish.  Arand is involved with the Franklin County Community Resource Board, where he has helped distribute millions of tax dollars to agencies serving the youth of Franklin County.

Arand and his wife, Dinah, are the parents of four children and have four grandchildren.  His proudest moments as an East Central alum came when two of his sons, Dane and Devin, decided to attend ECC and play soccer.  His daughter, Danielle, took summer classes and participated in numerous ECC theatre productions.