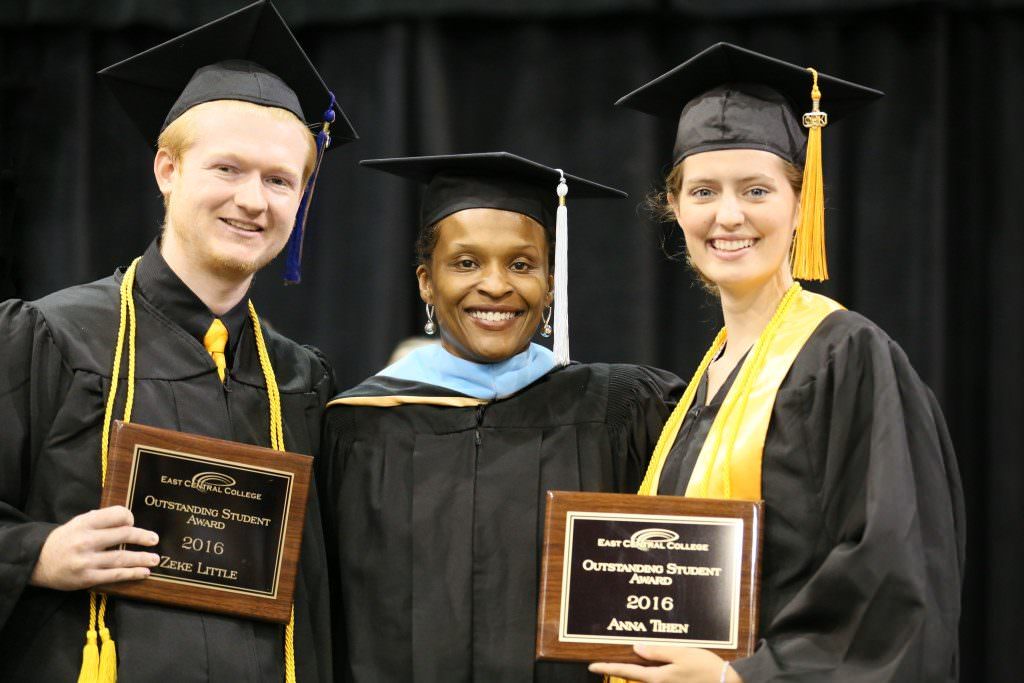 Anna Marie Tihen of Washington and Zeke Little of Quincy, Illinois, both received Outstanding Student Awards for 2016 at East Central College’s May 14 commencement exercises.  The award is the highest honor given to a graduate of ECC, and this year the voting by faculty and staff ended in a tie.

To be considered for the honor an ECC student must have maintained a grade point average of 3.5 or higher.  In addition to academic achievements, participation in campus and community activities is also considered.

Shelli Allen, vice president of student development, made the presentation.

A Washington area resident, Tihen has maintained a 4.0 grade point average while pursuing Associate of Arts and Associate of Fine Arts degrees in music.  At ECC she has been very involved with the music department serving as accompanist for various choral groups and individual students.  In addition to serving as a student music ambassador and tutor for music history students, she teaches piano lessons and performs at various functions on campus and in the community.  This year she received honorable mention at the Missouri Music Teachers Association Collegiate Lower Division State Competition and was recently named ECC’s outstanding music student for 2015-16.

Her connection to East Central began when she was 10 years old as a member of the Children’s Chorale.  In 2010 she began taking piano lessons through ECC’s Community Education department.  Since becoming a full-time student in 2014, Tihen has been a member of Phi Theta Kappa scholastic honor society and graduates from ECC with highest honors.

Tihen has been extremely involved at River City Church and Living Bread Church as pianist, vocalist, and children’s church and choir leader.  She has also served as youth group leader and special events volunteer and coordinator.

The daughter of Ken and Lisa Marie Tihen, she has been awarded academic, music and transfer scholarships to Missouri State University where she will major in piano performance.

Little is a graduate of Notre Dame High School in Quincy, Illinois. As a health science major at ECC, he has attained a grade point average of 3.67.

A member of the ECC soccer team for two years, he was the starting goalkeeper for the Falcons.  Little  was named First Team All-Conference by the Missouri Community College Athletic Conference coaches his freshman year while helping to guide East Central  to a conference championship and back to back National Junior College Athletic Association Region 16 championship games.  He was also named Academic All-Conference and All-Region his freshman year and will receive the same honors at the conclusion of this academic year. He is a member of ECC’s Chi Delta chapter of Phi Theta Kappa scholastic honor society.

This past season he was named to the Scholar All-American Second Team by the National Soccer Coaches Athletic Association, and is projected to receive the NJCAA Award for Academic Excellence based on his current GPA.

As a high school student Little participated in a variety of community service projects.  For the past two years Little and the other members of the ECC soccer team have volunteered at the Missouri Special Olympics Spring Games and this spring helped at the Special Olympic soccer tournament.

The son of Kelly and Pete Little, he has been awarded academic and athletic scholarships to attend Quincy University in the fall.  He plans to major in nursing at QU and will be a member of the Hawks soccer team.