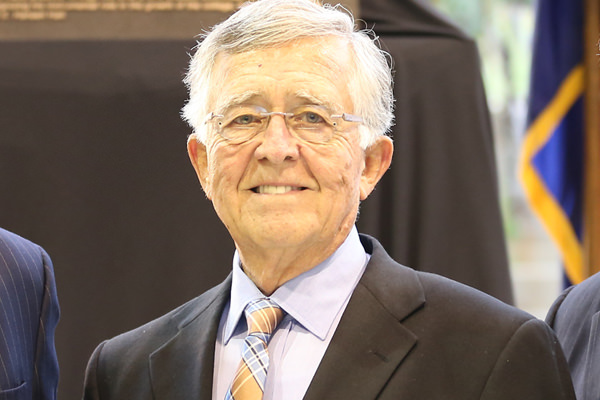 Dedication of Shook Student Center During May 16 Commencement

East Central College will honor Dr. Don Shook, the founding president of the college, by naming the Multipurpose Building on the Union campus in his honor.

Shook Student Center will be dedicated during ECC’s commencement ceremony Saturday, May 16, at 11:30 a.m.  Shook will give the commencement address.

The ceremony is open to the public and will be held in the gymnasium of the Multipurpose Building with a reception to follow.

“In so many ways, East Central College is the institution it has become because of the leadership and vision of Don Shook,” noted ECC President Jon Bauer.  “He led the college from its establishment, oversaw the construction of the main campus, and put into place the foundation that enabled the college to grow into a mature institution. Thousands of students became college graduates because of the work of Don Shook, and it is fitting that from this point forward every student who walks across the stage to become an East Central College graduate will do so in the Donald D. Shook Student Center.”

Shook led East Central for 18 years, the longest tenure of any president in the 47 year history of the college. He was the first employee hired by the Junior College District of East Central Missouri and was president when doors opened to students for the first time September 15, 1969.  At that time, classes were held in temporary facilities, including the Memorial Auditorium in Union.

During his administration at ECC, Shook was responsible for the establishment and growth of the current campus, including four major campus buildings. The college opened with 470 students.  At the time of his departure in 1986 more than 2,900 students were enrolled.

Shook served at four Missouri community colleges.  Prior to his work at East Central he was president of Crowder College in Neosho and dean at Mineral Area College in Park Hills.  He left ECC almost 29 years ago to become the founding president at St. Charles Community College and served there until his retirement in 1996.  Shook was also a college instructor, worked in admissions, and served as a high school principal and teacher.

ECC instituted a facilities naming policy in 2009.  It states that the board may consider naming honors for an individual who had a lasting and measurable impact on the college.  Trustees unanimously voted at their March meeting to name the building in Shook’s honor.