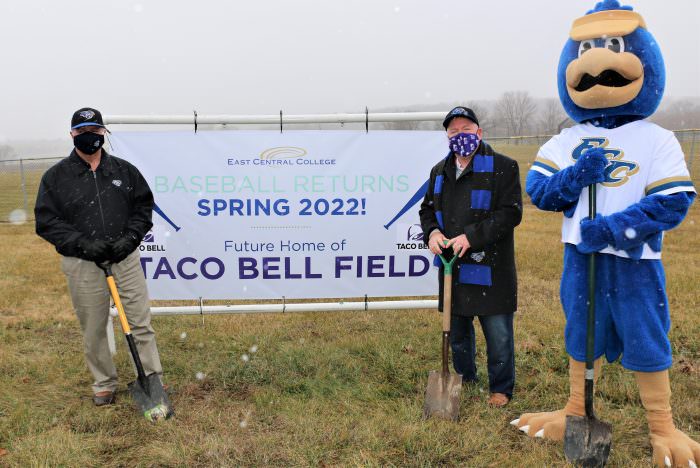 His relationship with the sport has taken him to the mound of Busch Stadium, home of the St. Louis Cardinals, to throw out the first pitch in game No. 1 of the 2011 World Series.

A more painful experience, Moroney said, was the time he was in the stands while the Cardinals played the Washington Nationals at Nationals Park in Washington, D.C., when he was struck by a Lance Berkman foul ball, sending him to the emergency room of a D.C. hospital.

But Moroney’s latest brush with America’s pastime is right here at ECC — the naming of the Falcons’ Baseball field “Taco Bell Field,” where the ECC team will begin play in the Spring of 2022.

Moroney is the president and owner of W & M Restaurants, Union, which owns Taco Bell restaurants in St. Clair, Union and Washington, and more than a dozen fast-food restaurants in the region.

Late last year, Moroney committed to donating $25,000 to the ECC Foundation, purchasing the naming rights of the baseball field.

John and his family, including wife, Jeannine, and son, Patrick, were on hand Friday, Jan. 15, for a “groundbreaking” ceremony recognizing his contribution to the college.

“I am so honored to be able to do this. It is exciting, and there is baseball tradition here, obviously,” Moroney said.

The team set to begin play next year will be coached by Coach Brandon Rains.

“When I was here the baseball team was pretty good,” Moroney remembered. “We had some great players.”

“There is a lot of interest in baseball locally,” he added. “We have Little League teams in all of the towns in the areas — the people around this community are excited for ECC’s baseball team to take the field next year.”

When the Falcon Baseball team takes the field next year, Moroney said he will be there to watch the crew during its inaugural season.

“It will be so neat to be able to come and watch games,” he commented. “I think it is incredible that ECC has done this.”

ECC President Dr. Jon Bauer, who also is an avid baseball fan, said there were vital components that were necessary to reintroduce baseball at ECC.

“When we first talked about doing this, it was very critical that we had a few things in place,” he said.

Moroney played a very important role in the plans for the return of baseball at the college, according to Dr. Bauer.

“To have John step up like this as an alum, individually, and as a business leader getting this off the ground was extremely important to the success of this program,” he further added.

Dr. Bauer noted that Coach Rains already has signed local players and he is working on signing more from the area.

“This is really just an exciting development for East Central College, and it could not be done without local support,” he said. “That’s what a community college is about and that’s what this day is about.”

To learn more about baseball at ECC or donate to the campaign, visit www.eastcentral.edu/baseball.