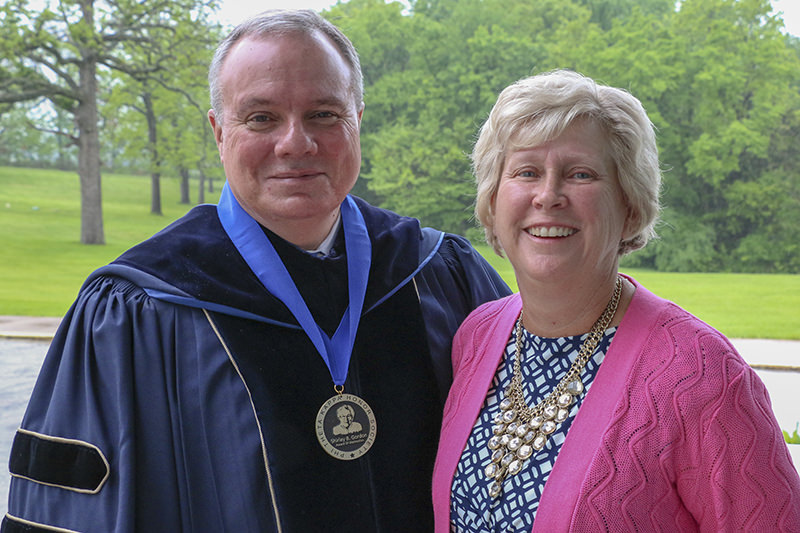 Dorothy Schowe started as a temporary secretary in the East Central College Community Relations Department in 1980. She retired in 2016 as the Director of Public Relations. She’s hardworking, dedicated and thoughtful, and it’s one of many reasons Dorothy Schowe was chosen as the East Central College 2019 Outstanding Alumni! The award, presented annually to honor an ECC graduate who has used their education to benefit the community, doesn’t come as a surprise to those that know her well.

“Throughout her career at East Central College she has been a true ambassador for the College,” said Bonnie Gardner, executive assistant to the president. “If there was an event on campus, Dot was not only promoting it, she was intimately involved in ensuring the event’s success. Her love for ECC was very evident in everything she did.”

For the past 39 years she has been involved with the Missouri State High School Activities Association’s District Music Festival held at East Central College. As a supporter of the East Central College Foundation, Schowe established an endowed scholarship in memory of her parents, Helen and Jack Luecke. Schowe is a past member of the Franklin County Area United Way board of directors and continues to volunteer her time with the organization through its Power of the Purse and Door-to-Door drives. In 2016, she was honored with the United Way’s Red Feather award. It is presented annually to an individual, company or organization that best imparts the qualities of integrity, community spirit and courage. She is also currently a member of the Franklin County Community Resource Board and serves on the Scenic Regional Library Foundation Board. She was treasurer of the New Haven Elementary School PTO, secretary for the New Haven Music Boosters, and a Shamrock Athletic Booster Club member. She was also on the New Haven School Board, serving as treasurer and  president.

A 1975 graduate of New Haven High School, Schowe began her college education at then East Central Junior College. After graduating with an Associate of Arts degree in 1977, Schowe transferred to Central Missouri State University in Warrensburg. She served as editor of the college yearbook her senior year and obtained her bachelor’s degree in public relations from CMSU  (now the University of Central Missouri) in 1979. Schowe and her husband, Don, have two children and two grandchildren.