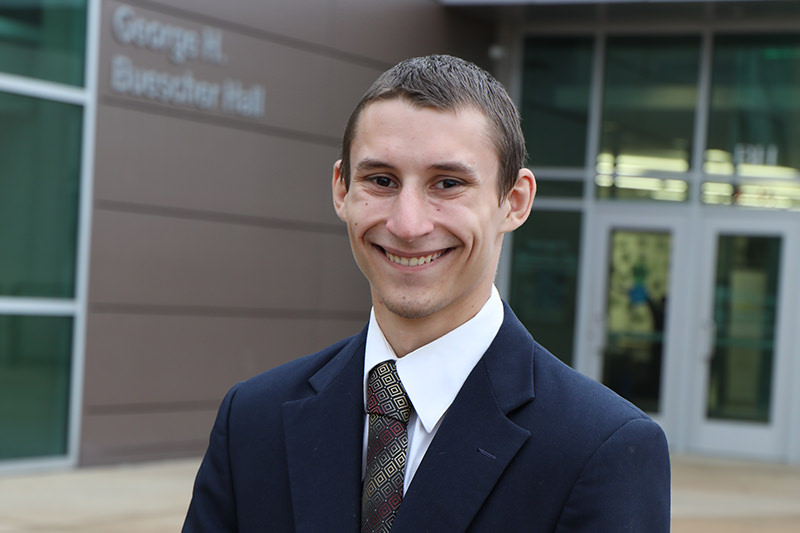 Sullivan native Joshua German had been named the 2019 Outstanding Student Award Winner. The award is the highest honor given to a graduate of ECC. To be considered for the honor, an ECC student must have maintained a grade point average of 3.5 or higher. In addition to academic achievements, participation in campus and community activities is also considered.

German is an exceptional student leader who has made remarkable contributions to East Central College. In the 2018-2019 academic year, Josh served as President of Phi Theta Kappa-Chi Delta, Chief Recording Officer of the Student Government Association, the Co-Founder and former Vice President of Scholar Bowl and has maintained membership status in other student organizations including Rotaract and ECC Student Media.

“The level of tenacity Josh displays in all his work is incredibly inspiring,” said Campus Life and Leadership Coordinator Courtney Henrichsen. “While managing his extensive co-curricular involvement, he has continued to earn outstanding grades in his courses and has received the President’s List academic honor for the past three consecutive semesters.  He is truly the embodiment of our organizational values and aspirations.”

“When Josh is sitting in your classroom, you can expect great discussion and his trademark dry humor,” said Assistant Professor Leigh Kolb. “It has been such a joy to know Josh, and to be able to encounter him on his journey. How lucky we have been to have him on our campus, and how proud we will be to call him an ECC alum.”

German has also made contributions to the college above and beyond other student leaders by participating in strategic planning activities and assisting our Civic and Community Engagement Committee. He helped organize and lead more events and fundraisers than any other student in ECC’s recent history. He also led the efforts to organize a student trip to Montgomery, Alabama in order to give his fellow students the opportunity to visit the new Legacy Museum and Memorial for Peace and Justice.

“When Josh approached me about organizing the trip,” said Kolb, “I was overwhelmed with excitement. Not only was he personally inspired by readings in African American Literature the prior spring, but he wanted to create the opportunity for other students to experience history. Josh embodies what it means to take an education and not only make the most of it for himself, but also to share it with others.”

German plans to transfer to Truman State University, where he will work toward a bachelor’s degree in English. He hopes to continue his education at the graduate level and eventually become a college professor.