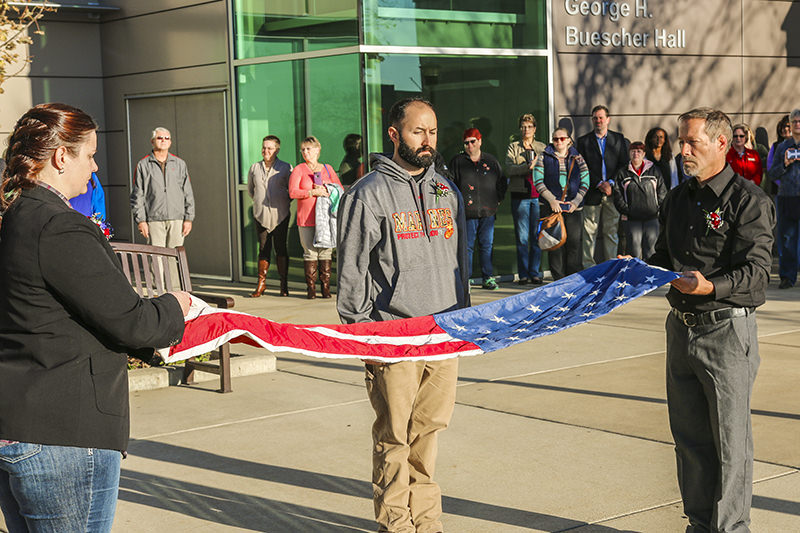 Driving onto the East Central College campus, it is easy to see the giant flag hanging on the side of the Donald Shook Student Center. It’s an appropriate place for the flag to be. Not only can you see it from Highway 50, but the building itself was named after a man who served in the U.S. Army before helping found the college.

November 11 is Veterans Day – a day we set aside each year to honor those who have served our country and those still serving. At East Central College, students, staff and faculty used the entire week to honor our heroes.

In Buescher Hall, a fallen soldier table acted as a centerpiece to the lobby – reminding us of the veterans who never made it home. Thank you cards also decorated the lobby during the week. Created by students at St. Ignatius Loyola School in Marthasville, the messages were simple but powerful.

“We are lucky to have you protecting our country,” one card read. “Thank you for helping those in need.”

“I love freedom, and I couldn’t have it without you,” read another.

“We all owe you our amazing lives here in America,” read one more.

Baskets filled with little green and khaki Army men also started appearing on campus at the beginning of the week with a message: “Please take a soldier home and place it somewhere that will remind you to pray for the men and women who served and are serving our country.”

“Here at East Central College,” he said, “we have employees, students and family members who serve and have served their country. They are willing to go wherever and whenever the need arises to face aggression and defend our freedom.”