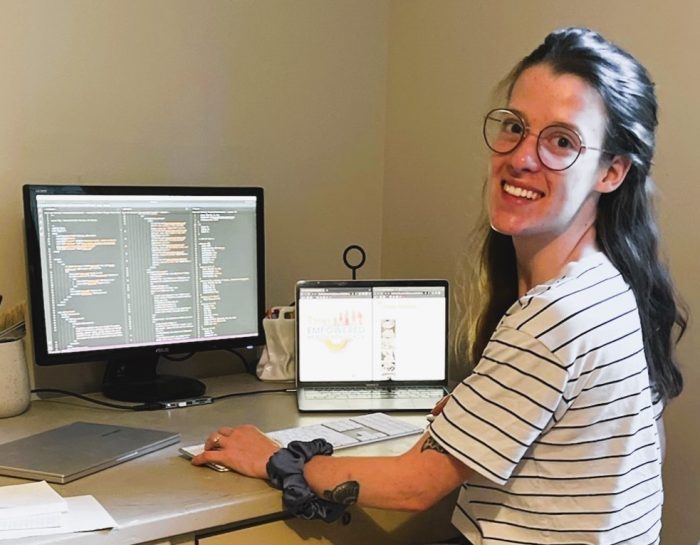 French is called the language of love, and many say Spanish and Italian languages are the most “romantic,” but for East Central College graduate Emily Stevens, her love language is SQL.

In fact, Stevens said, Structured Query Language — a computer language used in coding — completely changed her trajectory at ECC and he career.

Stevens, who lives in Columbia, was introduced to SQL during a class in the Health Information Management (HIM) program. She was taking the course online.

“I’m really grateful for the single intro to SQL assignment at the end of the Microsoft Access course,” she said. “That one assignment was so fun and interesting that I told my fiancé, ‘I wish that had been the whole class.’ His reply was, ‘well it can be.’ ”

Stevens took that advice and switched programs to ECC’s Computer Information Systems (CIS) — she graduated from the program in May with an associate of science degree.

“The need for affordable classes is what drew me to ECC,” she said. “I am really grateful that I found ECC, and I ended up in the online CIS program.”

Stevens added that Anna Schwein, recently retired CIS faculty member, went above and beyond when teaching students in her CIS classes.

“She clearly cares about student learning and was so encouraging and motivating along the way,” Stevens commented. “She’s a perfect model of a teacher and I am so grateful for the experience of being her student.”

According to Jason Durbin, assistant professor of CIS and business, Stevens enrolled in a “CIS Internship class,” which is not required for the degree but afforded her the opportunity for real-life experience.

Durbin noted that a new business in the Union area, Empowered Health Advocacy, reached out to him in need of assistance building a website.

“They were starting a new business and they needed a website, at the same time, Emily was looking for an internship — it worked for both of them,” Durbin said. “Emily was an outstanding CIS student, and she built the website from scratch.”

Empowered Health Advocacy provides doula services, and advocates for patients while bridging the gap with providers.

Stevens said she met with the company owners to learn what they wanted out of a webpage, and then she got to work designing and making the site user friendly.

“We talked about what they had in mind, and what type of content they wanted on the site,” she said. “We discussed options, what website designs they liked and what they were not fans of.”

After meeting with the owners, Stevens developed framework for the site, then began to build the site and make edits along the way.

She began work on the project in December 2022 and completed work in March, adding that she stopped counting the hours of work on the site after 300.

“That includes a lot of self-learning and research,” Stevens said. “I have always been confident working alone and figuring things out.”

She added that she will use that confidence and ability to self-teach to launch her career.

Stevens’ website, www.showmeemily.com, features her work and explains where she is taking her career.

“Turning ideas into creations describes a majority of my interests,” she wrote on the site. “Whatever that is I’ll jump in letting my mind and hands create something new, fun, better, or even just different.”

ECC offers both a certificate and degree in CIS, as well as a new “IT Helpdesk: Certificate of Specialization.”

In addition, ECC has a 2+2 agreement with the University of Missouri-Columbia where students can ultimately earn a Bachelor of Science in Information Technology.

It is designed for students to complete two years, or four semesters, of classes at ECC, and then two years of courses at the University of Missouri.

To learn more about ECC’s CIS program, people can visit https://www.eastcentral.edu/career-technical-education/ and click the CIS options.