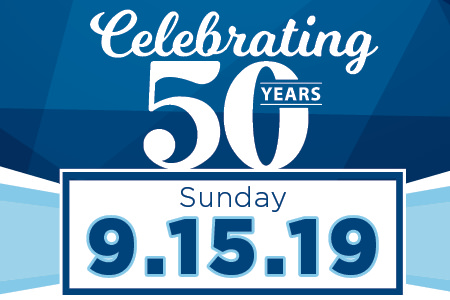 Food trucks, live music and games – all can be found at the East Central College 50th Anniversary Celebration on September 15 from 12 – 4 p.m.!

East Central College cordially invites the community to its Union campus for a day full of fun and reminiscing. The free event will feature a live petting zoo, a 1960s to 1970s vehicle display and inflatables for the kids.

A ceremony will begin at 2 p.m. in the theater honoring the people who were instrumental in forming the college 50 years ago. A time capsule will be also be a part of the ceremony!

“This is a wonderful opportunity for former alumni, faculty, staff and board members to reconnect with each other,” said Jay Scherder, Director of Public Relations. “We’ll have ‘mini class reunions’ throughout the day for all of our athletes, club members, faculty and staff. We also welcome members of the community to join in the celebration.”

Activities will take place in all campus buildings, including the East Central College Training Center and Business and Industry Center. Shuttles will be available during the event. Academic departments will host several interactive displays and presentations at the celebration.

On April 2, 1968, voters approved the establishment of the Junior College District of East Central Missouri. On September 15, 1969, nearly 17 months later, the first classes were held in temporary facilities at Memorial Auditorium in downtown Union.