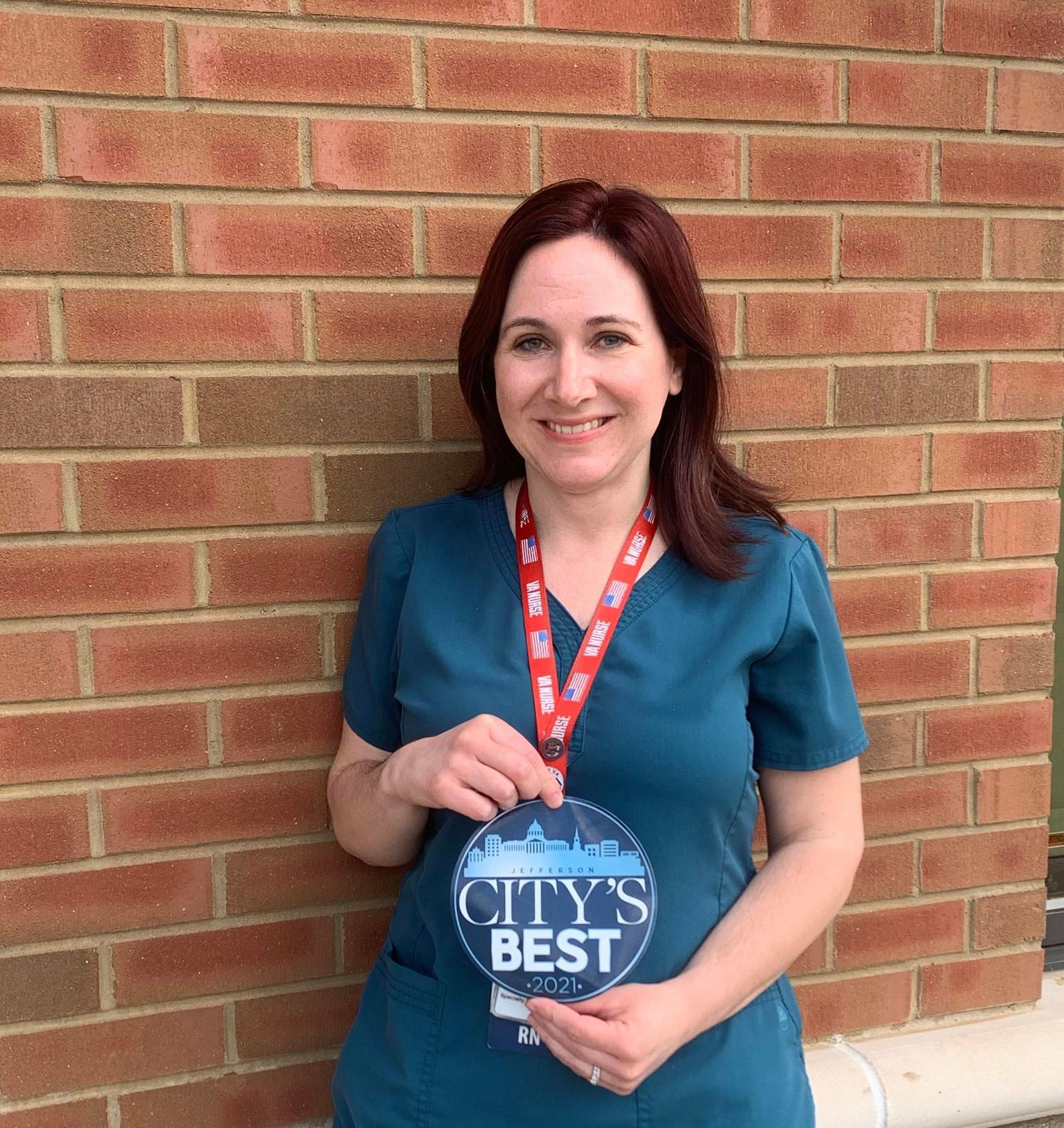 East Central College Alumna Erica Scott has been working as a nurse with veterans for nearly six years.

This year, her hard work and dedication was recognized by the Jefferson City community.

In March, Scott was named the “Best Nurse” in the Jefferson City Magazine “City’s Best Directory 2021.”

“I was shocked, surprised and completely humbled,” she said.

She added that the City’s Best Directory 2021 award is nomination based, but she was not told who nominated her.

“I presume it was one of the veteran patients, but nobody will tell me,” Scott said.

According to Scott, she works with about 1,000 patients.

“I don’t know that I deserve this,” she said. “There are so many nurses helping COVID patients all year — they really deserve it.”

Scott noted that since the beginning of the COVID-19 pandemic, her work with patients looks different. Over the past year, instead of seeing her patients in person, she primarily talks with them over the phone, gathering information and forwarding it to a physician.

“Since COVID, everything switched in the blink of an eye,” she said. “It is a huge honor that I made that much of a difference to someone and they thought of me for the award.

Scott, who is married with two children, is originally from the Hermann area and she graduated from Crosspoint Christian School in Villa Ridge in 2002.

She began prerequisites at ECC in 2002 and graduated with an Associate of Applied Science Degree in Nursing in 2005.

Scott noted that she took the prerequisites for a health care degree and eventually landed on nursing.

“The nursing program at ECC is phenomenal,” she said. “The teachers made sure that we were exposed to and had experience in everything — we were sent to a diverse selection of locations. That was very important.”

“The instructors wanted us to succeed and be safe as nurses,” she added.

Scott took a job with Boone Hospital in Columbia one month after she graduated from ECC. She left to work for the Harry S. Truman Memorial Veterans’ Hospital after a few years at Boone Hospital.

To learn more about the ECC Nursing and Allied Health program, visit www.eastcentral.edu/nursing/, or contact Nancy Mitchell at Nancy.Mitchell@eastcentral.edu.

Scott explained she has watched the health care field change dramatically over the past year.

“We have had to completely redo how we view and respond in health care to keep everyone safe,” she said.

Scott noted that in the height of the COVID pandemic, it was spreading to the older populations at a high rate.

“That required a lot more triaging over the phone, but we still gave a high level of care,” she said. “We were constantly updated on CDC (Centers for Disease Control) guidelines and talking with patients to keep them educated about COVID, and how to keep safe.”

For the older veterans she worked with, Scott said, there was a constant fear of getting COVID.

“Once they are diagnosed, it could go downhill very quickly,” she said. “Even if there was a slight decline, many patients were taken to the emergency room.”

According to Scott, oftentimes veteran patients were scared about how they would continue to get care during the pandemic.

“We let them know that we were still there for them, but that we had to do things differently,” she said. “Even though everything changed very quickly, we would take care of them, it was just in a different manner than before.”

Scott added that Harry S. Truman Memorial Veterans’ Hospital staff have always done everything they can for their patients.

“In a pandemic or not, we are always doing the best we can for our patients,” Scott said. “It has been a really hard year and to get this kind of recognition makes me realize our patients recognize that.”