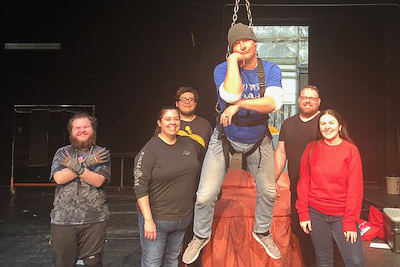 ECC’s 9 to 5 the Musical Will Fly High

The East Central Theatre Department is making final run-throughs for 9-5 the Musical, with a high-flying treat for audiences.

It is the first time that a performer will fly through the air on stage at the John Edson Anglin Performing Arts Center. Director Grace Austin said the cast is working with On the Fly Productions, LLC, St. Louis.

“This year, we were fortunate with the support of the administration to be able to hire On the Fly, A professional company out of St. Louis that also does flying productions all over the world,” Austin said.

“Being able to fly a performer as called for in the script is a new thing for us and something unique that we are able to offer to our students who were trained by On the Fly,” Austin added. “We are definitely hoping to partner with the company again to offer flying workshops.”

The musical is set in the late 1970s and is a story of friendship and revenge in the Rolodex era. The music and lyrics of this outrageous, thought-provoking, and even a little romantic musical, were written by Dolly Parton.

The cast will be led by ECC theater veterans Brittany Losh as Judy Bernly; Tara Steffens as Violet Newstead; and Chad Greife Wetenhall as Franklin Hart; with newcomers Rebecca Evans as Doralee Rhodes and Crystal Pratt as Roz Keith.