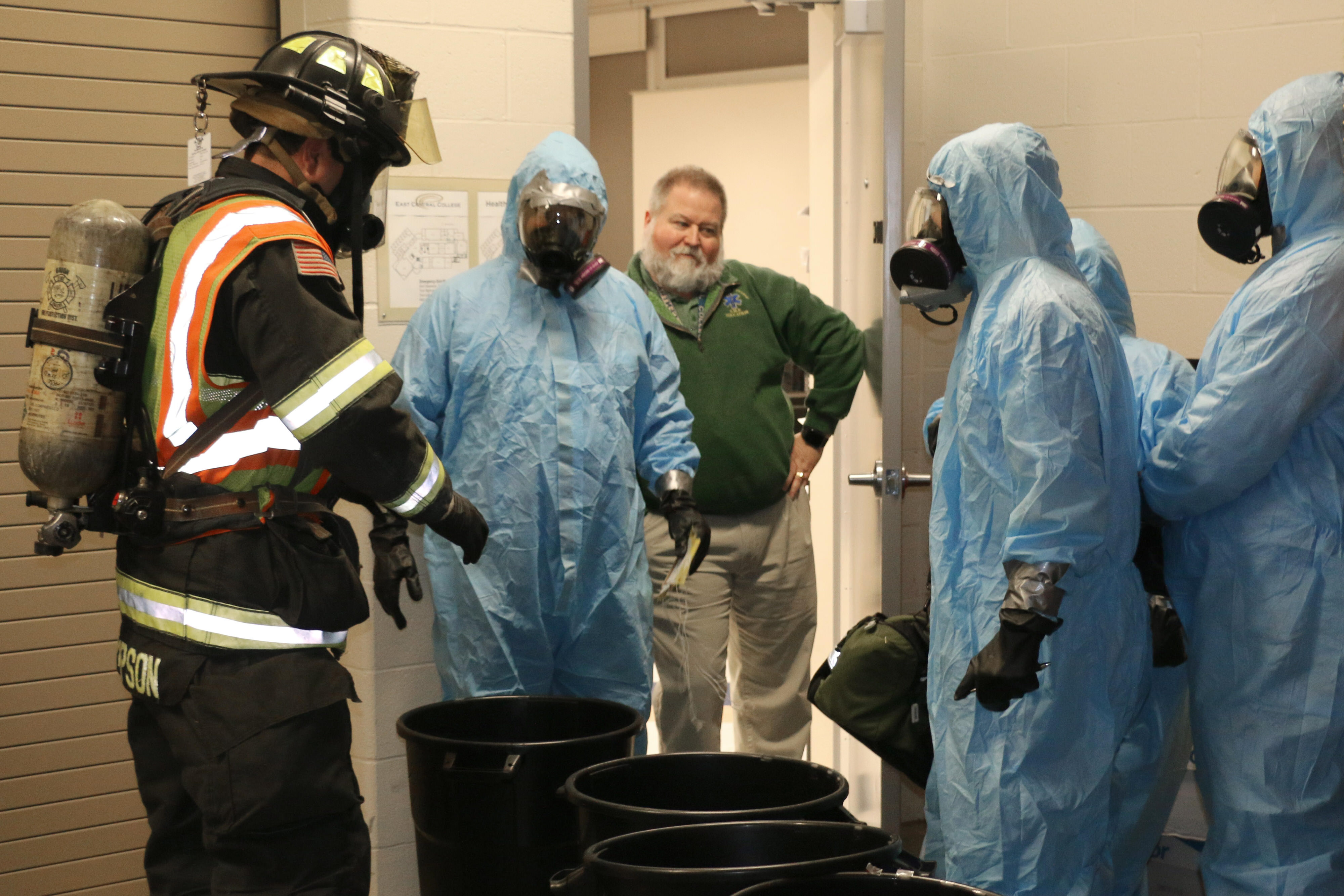 During the drill, ECC paramedics technology classes worked side by side with a Union Fire Protection District (UFPD) crew for a Sarin gas bioterrorism demonstration.

“We put some of the processes into practices, so instead of lecturing on them, we were simulating more,” Fitts said.

Goodson noted that this is the first time that the ECC paramedic classes have run a bio terrorism simulation.

“It hasn’t been done before,” Goodson said, “so this was a learning experience for all of us.”

According to Fitts, there are two paramedic classes this semester that both participated in the demonstration and training.  He explained that the Union Fire Department set up equipment for hazmat decontamination procedures.

“Since they do not use this on a regular basis they were reviewing their procedures and doing refresher training on its setup and use,” Fitts commented.

The demonstration was all done in the EMS lab/ambulance garage inside the ECC Health and Science building. Goodson said that the bioterrorism scenario reinforces what students are learning in lecture.

“We are putting the operation chapters of text books into hands-on situations,” she said. “It is better than just reading.”

After suiting up, the students took part in the decontamination of the area and then triage where they prioritized patient treatment based on the severity of the exposure to the “nerve gas.” Student and fire district role players also assisted with the scenario, acting as patients.

After triage, the victims were transported to the “green zone” where it was determined how and where they were to be transported.

“The students did well,” Goodson added. “There were a few hiccups but it is a learning experience — it is better to make a mistake in the classroom than on the street.”

See a video of the scenario shot in the ECC Health and Science Building here: https://youtu.be/b2m6U-2VXjc

The process included a demonstration on properly putting on “entry suits” used in the hazmat situation taught by Bob Dopp, a senior active member of the UFPD and ECC instructor.

“We talked about different chemicals they may encounter and how to completely seal the suits for respiratory protection so they don’t pick up dust for whatever situation they may be in,” Dopp said. 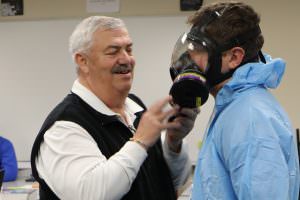 The scenario, all around, was successful and informative for the students, and the UFPD firefighters, he noted. Dopp previously worked with the Missouri Department of Public Safety as an evaluator and observer.

“Jenifer (Goodson) did a heck of a job in writing the scenario and the role players did an excellent job,” Dopp added.

While in the suits, students conducted routine tasks, such as using the stairs, as well as basic patient care. After running through the Sarin gas scenario, the class, instructors, firefighters and role payers held a “debriefing” where there were questions about what could have been done better, and suggestions to improve the training.

“There were good questions and comments,” Dopp added. “This helps prepare the paramedic students and, helps the first responders be better prepared.”

The UFPD has been working with ECC for years is many capacities. For example, every semester the district conducts an auto extrication demonstration. The college provides vehicles for the extrication demo and the fire district uses its own equipment to teach students how to remove a victim from a vehicle that was involved in a crash, according to Fitts.

“For the fire district volunteers it is continuing education,” he said. “That has been a great partnership.”

To learn more about the ECC paramedic technology classes and degree, visit https://www.eastcentral.edu/nursing/paramedic-technology/.