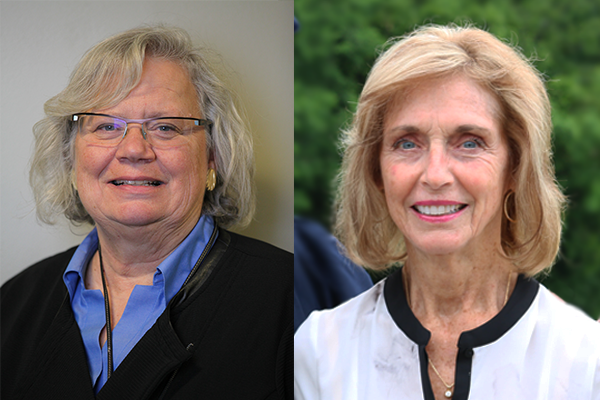 Fink Johnson, Freitag Selected for Board of Trustees

Prudence Fink Johnson and Audrey Freitag will be sworn in as East Central College Board of Trustees members in 2018.

Filing for the April Board of Trustees election closed January 16 for two expiring terms. Since neither seat was contested, an election will not be held in April. Fink Johnson and Freitag will be sworn into office and begin their terms at the April meeting.

Fink Johnson will continue representing Subdistrict 2, which includes the school districts of Lonedell R-14, St. Clair R-13 and Union R-11, excluding the Lyon and Boone Township portion of Union R-11 and the portion located in the Beaufort-Union precinct. She was first elected to the board in 1994 and will begin her fifth term in April.

Freitag will represent Subdistrict 1, which includes the school districts of Crawford County R-1 (Bourbon), Sullivan C-2, Strain-Japan R-16, Spring Bluff R-15, Franklin County R-2 and New Haven, including the portions of Lyon and Boone Townships and the Beaufort-Union precinct in the Union R-11 School District.  Also included are the portions of the Boeuf and Lyon Townships in the Washington School District. She will replace Don Kappelmann, who retired after 12 years on the board. Audrey is an ECC alumna and has been active with the ECC Foundation for many years.

The Board of Trustees is the sole statutory legislative governing body responsible for the control and operation of East Central College. Monthly meetings are normally held on the first Monday of the month on campus. Learn more about the Board of Trustees.