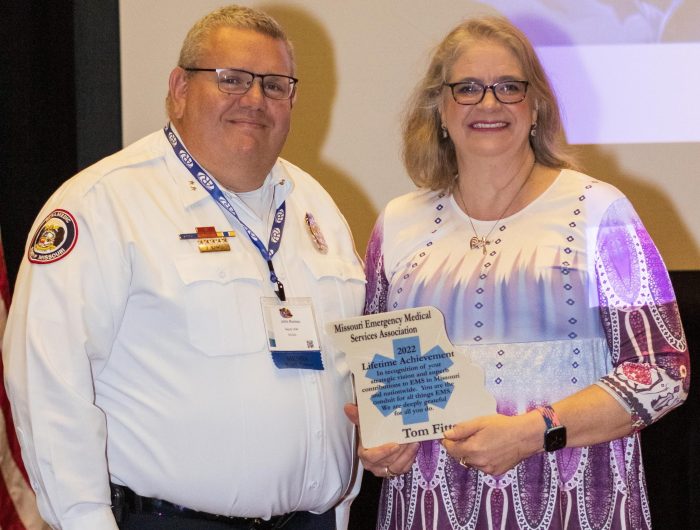 Fitts was ECC’s EMS coordinator at ECC for nearly 20 years. He passed away Nov. 10, 2021, after battling cancer.

“Tom made the world a better place,” Duncan said. “Tom saved lives and eased suffering. Both directly and indirectly through the countless clinicians you helped to build — for this, we are eternally grateful.”

Fitts was a life-long EMS clinician, educator, and staunch patient advocate. He began his career in the 1980s as an advanced first aid provider and volunteer. As an instructor, Fitts continued to advocate for the EMS community.

Duncan noted that Fitts was an incredible teacher who drew upon his experience to help guide students.

“You can teach just about anyone to memorize an algorithm or to start an IV.  But the real gifted educators instill values in their students,” he said.

“They give a bit of their soul to their students in hopes that it will carry on to said students’ patients.  Tom was one of those — He helped his students to learn empathy. He taught his students to walk a mile in the patients’ shoes.  He gave a little piece of his soul to each and every student he taught,” Duncan added. “And he could roll his eyes and make a sarcastic comment better than just about anyone.”

In September 2021, Fitts received the MEMSA Jack Lyon Memorial Instructor/Coordinator of the Year Award. He was nominated by Jenifer Goodson, ECC EMS Program Coordinator. The award was presented at ECC. 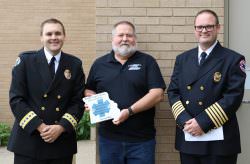 In 1984, Fitts received his Emergency Medical Technician license while attending nursing school. He began working for the Meramec Ambulance District and volunteered for the Eureka Fire Department.

After nursing school, he worked as a cardiothoracic nurse at St. Luke’s Hospital and then in the emergency room at St. Luke’s Des Peres Hospital, where he was head nurse. He also worked at Mercy Hospital Washington with his wife.

Fitts obtained his paramedic license and then started working full-time for the Washington Area Ambulance District. He also was helping his wife, who was the paramedic program director at ECC.

In January of 2002, Fitts was hired as the EMS Program Coordinator at ECC and occasionally he assisted with the nursing programs.