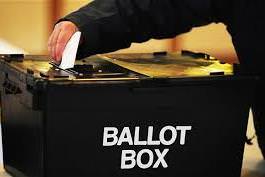 Hays and Park Elected to ECC Board of Trustees

Cookie Hartbauer Hays of Union and Dr. Eric Park of Washington defeated challengers Dan Leslie of Labadie and John Witt of Washington for the two open seats on the East Central College board of trustees.

The April 5 election was for seats from sub-district three. Sub-district three includes all of the Washington School District, excluding that portion located in Boeuf and Lyon Townships. The ECC board consists of six trustees, two each from three sub-districts of the college district.  Though trustees are elected at large, a candidate must be a resident of the sub-district he or she represents.

Hays and Park are both graduates of ECC.  They will replace retiring board members Jim Perry and Tom Dill.  Perry was first elected to the ECC board in 1998.  Dill has served as a trustee since 2004.

Other current trustees are Ann Hartley and Prudence Fink Johnson of Union, Don Kappelmann of New Haven, and Dr. Joe Stroetker from Sullivan.

Unofficial results of the April 5 election for East Central College board of trustees are as follows:

The new trustees will be sworn into office at the April 11 board meeting.