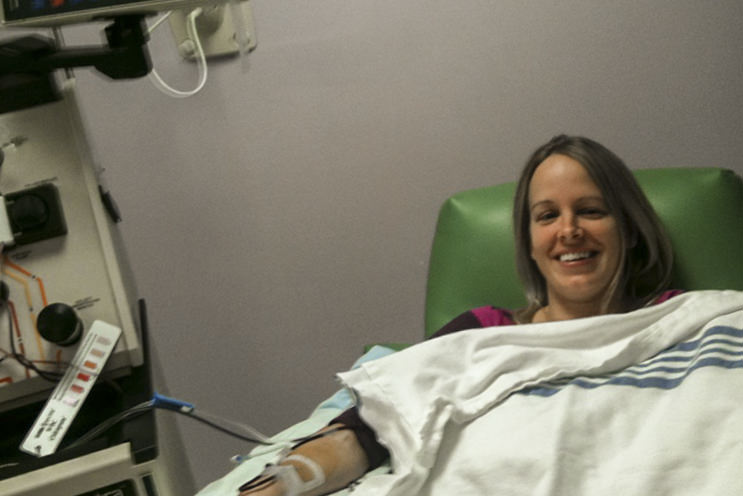 When given the chance to possibly save someone’s life, East Central College student Stacy Squires couldn’t pass it up.

“There was a bone marrow donor registry drive in Washington back in 2004,” she explained. “It was for a local resident needing a transplant.”

Stacy wasn’t a match at the time, but her information remained in the system. In 2006, she got a call.

“I was contacted as a possible match,” she said, “but after further testing, I wasn’t a close enough match.”

Another four years went by, and Stacy received another call. This time, it was meant to be.

“I was selected as one of the closest matches ever found in the history of the registry,” she said.

The donation was for a woman in her 60’s that Stacy had never met. During the final week before the donation, Stacy was told the recipient’s own marrow cells were being destroyed. Without her donation, she would not survive.

“The time and emotions involved with donating process and appreciation expressed by everyone involved made it a truly remarkable experience,” Stacy said. “Because my donation occurred on December 7, I knew I was able to give the gift of life for Christmas to my recipient.”

For Stacy, it didn’t cost a thing.

“All of my expenses were paid for by the Be the Match organization,” she said. “The donor center followed up with me several times during the first year on how my health was since the donation.”

A year later, Stacy received word that her recipient was doing well. Now, more than six years later, Stacy’s mission of helping others continues. In collaboration with the East Central College Student Government Association, she is hosting a bone marrow registry drive.

“It’s as easy as just getting your cheek swabbed,” she said. “The entire process only takes 15 minutes!”