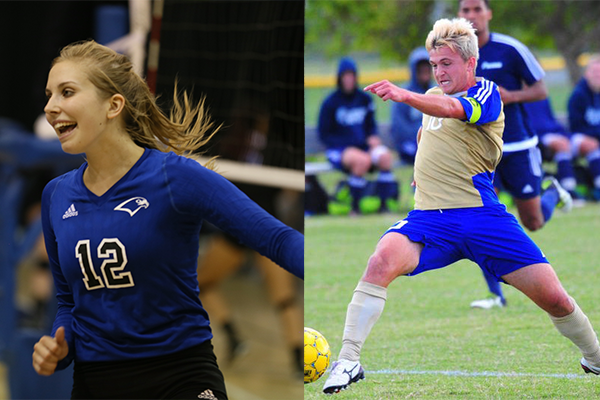 Moore has been a catalyst to the Falcons’ success on the pitch for the past two years. During his tenure, the East Central College soccer team put together an impressive record of 26-9-2.

Individually, Moore became one of the all-time leaders in the ECC Soccer record books. He is tied for first on the all-time assist record with 24 in two years. As a goal scorer, he ranks third all-time with 32 total goals. During his sophomore campaign, with five fewer games on the season, he collected 17 goals and 10 assists. It topped his 2015 freshman season with 15 goals and 14 assists.

As Moore’s two years come to a close at East Central College, he plans on playing two more years of college soccer at a top level university. Currently, he is looking at Dayton University in the Atlantic 10 Conference to pursue his academic and athletic career goals.

Meanwhile, Vedder has been the assist provider for two winning seasons in a row for the Falcons. While captaining the ECC squad, the Falcons put together a 44-34 record in two seasons combined with help from Vedder.

As a setter, Vedder’s primary responsibility has been to set the offense into motion. Her single season assist total this fall at 984 ranks her fourth overall in the ECC record books. The two years she has spent at East Central College has put her third all-time in assists for a career with 1,906. During her freshman year, Vedder was named Second Team All-Region, but as a sophomore, she received First Team All-Region and First Team All-Conference honors. The Falcons finished the 2016 campaign as NJCAA Region 16 runner-ups to MCC-Longview.

Vedder plans on transferring to Missouri S & T to complete her degree in engineering. She also hopes to continue playing the sport she loves at the four year level, but studying comes first as she prioritizes her future plans.