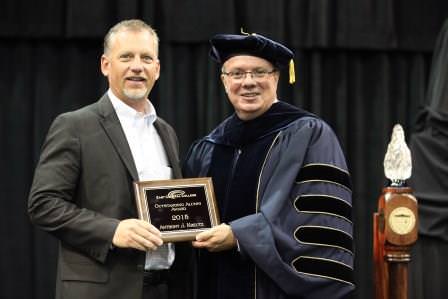 Anthony (Tony) Kreutz of Union was named recipient of the East Central College Outstanding Alumni Award for 2015.  The award is presented annually to honor an ECC graduate who has used his or her education and been of service to the community.

Dr. Jon Bauer, ECC president, made the presentation at college commencement ceremonies held Saturday, May 16, at the campus in Union.

Kreutz began his college education at ECC in 1984, and earned a one-year certificate in welding the following May.  While balancing work and family responsibilities, he returned as a part-time student, eventually earning his Associate of Applied Science degree in welding.  From ECC he went on to earn a bachelor’s degree in business administration from Lindenwood University.

In 1991 he began his career at SCI Engineering as structural steel manager and in 2001 advanced to his current position as vice president and partner at the company.  As director of business development he oversees corporate customer service and marketing, including strategic planning, acquisitions and expansion.

A leader in his profession, Kreutz also volunteers his time with many organizations.  He has been asked to serve on the board of directors for the Downtown Partnership of St. Louis, the Hawthorn Foundation, and First State Community Bank.  He began his affiliation with the Make-a-Wish Foundation as a wish grantor and in 2016 will serve as chairman of that organization’s governing board in Missouri.  He currently chairs the Mercy Foundation board and is on the executive board of the ECC Foundation.  Kreutz is a third degree knight with the Knights of Columbus in Washington. 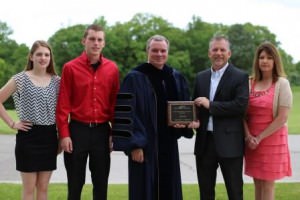 A member of the Washington and Union Chambers of Commerce, Kreutz has also coached his son and daughter’s Union Soccer Association teams as well as his son’s baseball teams.

Kreutz is a graduate of St. Clair High School.  He is a member of St. Joseph Church at Neier. He and his wife, Michelle, live in Union. The couple has two children, Jacob and Kaitlyn.