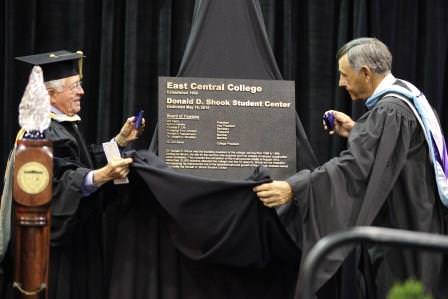 The 45th annual spring commencement was held at East Central College Saturday morning, May 16.  The class of 2015 included 503 candidates for graduation.

Dr. Don Shook, ECC’s founding president, congratulated the graduates on their achievement, noting that education is the clearest and best way to develop the talent and skills so important to the economic and social wellbeing of this country.

“Graduation is the result of having a plan and completing it,” said Shook.  “Today you are recognized for what you have achieved.  What you accomplish in the future will to some extent be determined by the efforts of others around you. Be appreciative and grateful.” 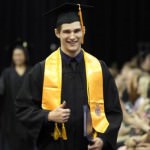 Members of the college board of trustees awarded the diplomas at the 11:30 a.m. ceremony.

As a part of commencement ceremonies, the college renamed the Multipurpose Building the Donald D. Shook Student Center.

In March ECC trustees voted to rename the building to honor Shook for his significant, lasting and measurable impact on the college. He led the college from 1968 to 1986, the longest tenure of any president in the 47 year history of the college.

During his 18 year administration, Shook was responsible for the establishment and growth of the permanent campus in Union which included construction of four major campus buildings. More than 23,000 students attended the college over that period.

Attending the ceremony were Shook’s wife, June; their sons, Greg and John; daughters-in-law and three of the five Shook grandchildren.

Completed prior to the start of the 1973 fall semester, the Multipurpose Building was constructed with funds from a $1.2 million no tax increase bond issue approved by district voters in May, 1971. The college also received more than $800,000 in grant funds for the project from the Higher Education Facilities Act.

The building was constructed to house classrooms, offices, multi-use areas, locker rooms and the gymnasium for the English, music, speech and physical education departments. A remodeling project in 1998 allowed for expansion. The facility now also houses the cafeteria, bookstore, human resources, fitness center and interactive classrooms.