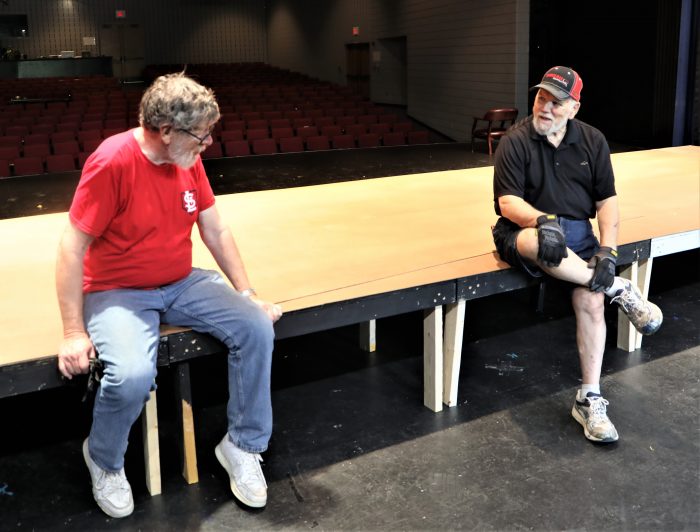 The East Central College Theatre Department will be celebrating “Christmas in July” with its summer production of “Miracle on 34th Street: A Live Musical Radio Play.”

The performances will be July 21- 23 at 7:30 p.m. and July 24 at 2 p.m. in the John Anglin Performing Arts Center in Hansen Hall. The show is directed by John Anglin with musical direction by Paula Nolley.

Anglin explained that the show is set in a New You City radio studio. The set is decked out with three large Christmas trees, and much more to bring the holiday season to life this July. 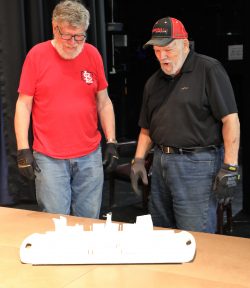 John Anglin and David Sutton are pictured Tuesday, June 7, with a 3D model of the set of “Miracle on 34th Street: A Live Musical Radio Play.” The pair worked on the set in the John Anglin Performing Arts Center in Hansen Hall. Anglin is directing the show that he calls “Christmas in July,” and Sutton is a cast member. Sutton has been in performances directed by Anglin spanning five decades. This summer’s show will be July 21- 23 at 7:30 p.m. and July 24 at 2 p.m.

“This is really going to be a great show,” he said. “The whole show is in a radio studio with a lot of sound effects going on — we are going to have a lot of fun.”

The musical was adapted from the 1947 Lux Radio broadcast by Lance Arthur Smith with original songs and arrangements by Jon Lorenz. This heartwarming, family-friendly classic includes live foley effects and jazzy arrangements of holiday carols.

To order tickets, visit www.showtix4u.com/event-details/64911. For questions regarding tickets, contact the Box Office at 636-584-6693 or boxoffice@eastcentral.edu.

Anglin noted that he handpicked the cast members, who he knows will bring a lot of great energy and fun moments to the production.

“It is a great cast of heavy hitters,” Anglin commented. “I have been working with some of the cast members for many years.”

That includes Sutton, who has been on stage in Anglin’s productions spanning five decades.

Anglin added that this production is a family affair, with father and daughter Darrell Herron and Bethany Herron; and four members of the Clary family — Andrew and Elizabeth, and their daughters Lydia and Nora.

Each summer, Anglin selects and directs a show at the College. He said he picked “Miracle on 34th Street: A Live Musical Radio Play” based on the script. 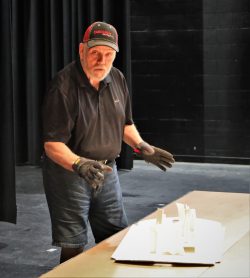