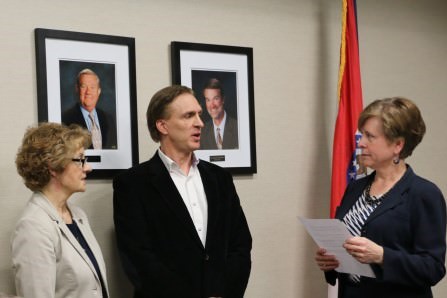 Two new members were sworn into office at the April 11 meeting of the East Central College board of trustees.

Cookie Hartbauer Hays of Union and Dr. Eric Park of Washington were the winners in the April 5 election for two open seats on the board from Sub-district Three.  They defeated challengers Dan Leslie of Labadie and John Witt of Washington.

The April 5 election was for two open seats from Sub-district Three, the area that includes all of the Washington School District, excluding that portion located in Boeuf and Lyon Townships. Trustees Jim Perry and Tom Dill did not file for re-election.

The ECC board consists of six trustees, two each from three sub-districts of the college district.  Though trustees are elected at large, a board member must be a resident of the sub-district he or she represents.

Dr. Joe Stroetker of Sullivan and Don Kappelmann of New Haven represent Sub-district One.  That sub-district includes the school districts of Bourbon R-I, Sullivan C-2, Strain-Japan R-16, Spring Bluff R-15, Franklin County R-2, New Haven, and the portions of Lyon and Boone Townships as well as the Beaufort-Union precinct in the Union R-11 School District.  The portions of the Boeuf and Lyon Townships in the Washington School District are also included in Sub-district One.

The board of trustees is the sole statutory legislative governing body responsible for the control and operation of East Central College. Neither state statutes nor district policy limits the number of terms a member may serve.

After the new board members were sworn in, trustees elected Hartley board president. Stroetker will serve as vice president.  Kappelmann was elected secretary, and Fink Johnson will continue to serve as board treasurer.  Hays and Park will serve as directors.  Bonnie Gardner, executive assistant to the president, was re-appointed recording secretary.

The results of the April 5 election as certified by the county clerks are as follows: