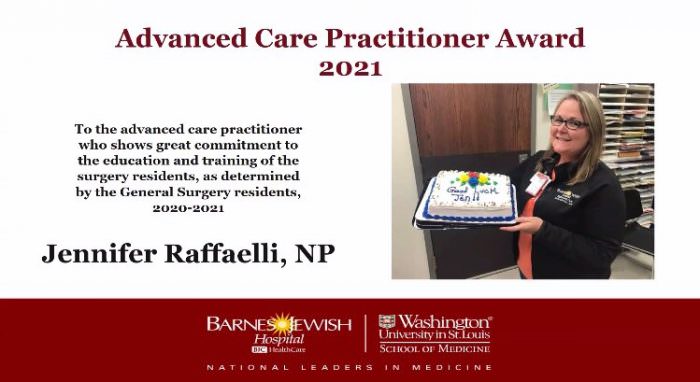 Nursing Alum Recognized as Practitioner of the Year

East Central College Nursing Program alumna and nurse practitioner Jennifer Raffaelli recently was recognized by the resident doctors at Barnes-Jewish Hospital for her knowledge and the assistance she provides them.

Raffaelli, a 2010 ECC Nursing Program graduate, is a trauma surgery nurse practitioner with Washington University at Barnes-Jewish Hospital. In June, she received the Advanced Care Practitioner of the Year for 2020-21.

She was nominated for the award by a resident physician. Then the residents, interns, chief residents and fellows voted for the nominee who is most helpful to them when they need assistance.

This is the second consecutive year that Raffaelli was nominated for the Advanced Care Practitioner Award, and the first time she won.

“It is such an honor to even be nominated,” she said. “I appreciate that the residents recognize what I do to make their life easier — I am very gracious that they picked me. It is a huge honor.”

The award is presented to the surgical care practitioner who shows “great accomplishment to the education and training of the surgery residents.”

In 2008, Raffaelli, who had a business degree, was considering a career change. She enrolled in the ECC Nursing program and graduated in May 2010.

She said ECC had a very positive impact on her education and her career trajectory.

“I loved the ECC nursing program,” Raffaelli said. “The instructors were all amazing.

“It was such a supportive and positive environment not only with my classmates but with all the nursing faculty and administrators,” she added. “If I had to do nursing school all over again, I’d absolutely go right back to ECC. No hesitation.”

Raffaelli, who is originally from St. Louis, worked at St. Anthony’s Hospital, now Mercy Hospital South, after graduating from ECC.

She later obtained a degree to become a board-certified nurse practitioner from Maryville University.

Raffaelli began working at Barnes-Jewish Hospital in 2018. She is married with two children.