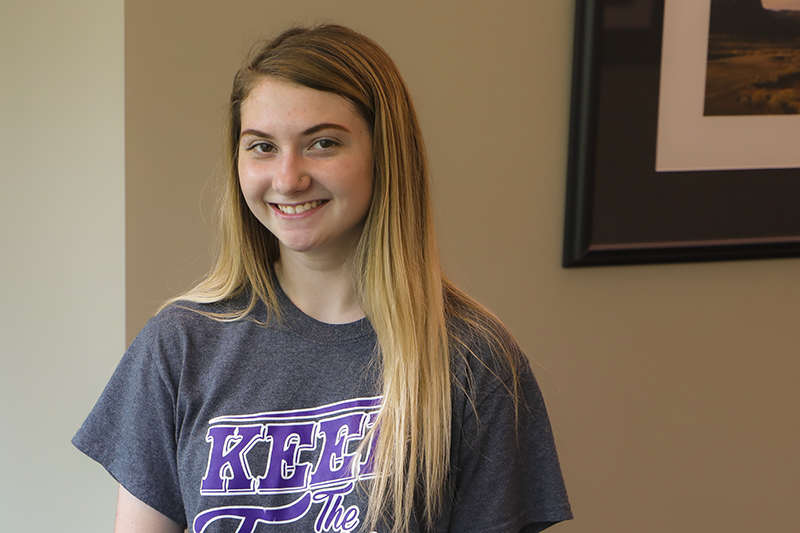 The classrooms of East Central College are full this summer, thanks in part to Three for Free – an initiative giving area high school students a chance to take a tuition-free summer course.

“Students were only responsible for course fees and textbooks,” said Heath Martin, vice president of student development. “We felt this was a great way for area students to get a feel for what East Central College has to offer.”

Classes started June 3, and the experience is already going well for Jadyn Chirico. The St. James High School student is taking a general psychology course this summer through the Three for Free initiative. “The class work is very interesting,” she said. “I’ve already learned a lot more than I knew before. I’m highly interested in psychology, but taking a class at my high school isn’t something I am able to do. Getting to learn about the subject through East Central College is a great opportunity.”

She’s one of nearly 100 students enrolled in tuition-free courses this summer at East Central College in Union and Rolla.

“From Borgia to Owensville to Vienna, we have students from more than 20 high schools enrolled in Three for Free this summer, as well as several homeschooled students,” said Megen Strubberg, director of early college programs.

Angela Kuhlmann is one of nine Union High School students who decided to enroll in courses this summer. When she heard about the Three for Free initiative, she jumped on the opportunity. “I thought it was a great chance for me to get college credit while still in high school,” she said. “If it wasn’t offered tuition-free, I’m not sure I would have taken a college class this summer.”

She plans to attend East Central College after graduation to take her general education requirements. “After ECC, I plan to transfer to a university to study pre-law.”

Along with the hard work of the East Central College Student Services Department, the Three for Free program helped boost summer enrollment in a big way.

“Enrollment for the summer semester is up more than 31 percent over last year,” said Dr. Jon Bauer, president. “The number of credit hours those students are taking is up nearly 26 percent. We are excited to have so many students taking advantage of our summer offerings.”

Alisa Glore is one of those students. The Bourbon High School student is taking a communications course through the Three for Free initiative. “I wanted to get a college class out of the way while I could,” she said. “I probably would have taken the class eventually, but getting the class tuition-free was a big help!” Glore plans to attend East Central College after high school to pursue a degree in nursing.

While many students will visit campus this summer, some won’t ever have to leave the comfort of their homes – like St. Clair High School student Emma Hinson. She’s taking general sociology online through East Central College.

“I want to get my prerequisites out of the way as fast as I can,” she said. “I don’t think I would have taken a summer class if Three for Free wouldn’t have been offered!”

What other students are saying about Three for Free:

–“I am going to be a senior in high school this upcoming fall, and I decided to participate in this program because I wanted to get a head start on my college credits,” said Eureka High School student Noelle DeRennaux. “I do not think I would have thought to take a summer class if it was not offered for free just because I would rather spend my money on other things!”

–“It seemed like a great opportunity to get a head start on some college classes,” said Union High School Student Sydney Eads, “and my parents encouraged me to! I probably would not have been so ambitious without the incentive program. It definitely helps.”

–“I took this class to get an early start on my career,” said Cuba High School Student Janell Light. “Though I still would have taken this class one way or another, it’s nice that it was free!”

–“I was able to use my summer science class as dual credit for my high school,” said Washington High School student Zach Miesner. “Plus, I’m able to get a head start on college credit. I wouldn’t have signed up for a class if it wasn’t for the discount and the dual credit opportunity.”

–“I decided to take a Three for Free class at East Central College because I believed it would help me in my future with becoming a nurse,” said Owensville High School student Paige Bossaller. “I will be honest with you, I probably wouldn’t of known about it or chosen to take the class if it wasn’t a Three for Free class!”

–“I wanted to take the a Three for Free class at East Central college to help me prepare for college,” said St. James High School student Sylvia Austin. “I would not have been able to take the class if it wasn’t for free.  I have tried saving up for college and this is a great affordable way for me to get a head start on my classes.”

–“Taking a Three for Free class at ECC was really easier on my family at this time,” said Bourbon High School student Shanadoah Keckler. “This program was just one of those opportunities I couldn’t pass up!”