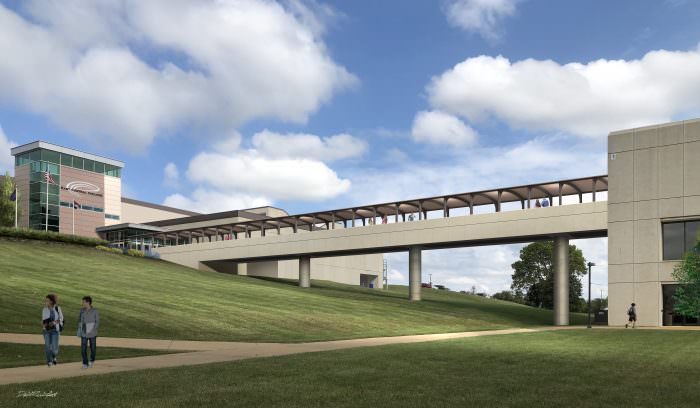 The East Central College Board of Trustees unanimously agreed to a concrete pedestrian bridge to replace the current bridge in the center of campus.

During the Nov. 8 meeting, trustees opted for the concrete structure over a steel truss structure after viewing renderings presented by Cochrane Engineering, Union. Cochrane is the firm providing construction services for the bridge replacement project.

Trustees agreed that the concrete bridge fits the architectural style of the buildings on campus.

Board members also voted in favor of a partially covered bridge to limit the amount of chemicals used to melt ice on the bridge deck, which can deteriorate the surface of the structure. Cochrane will now move into the design phase of the project following the decisions by trustees.

The bridge connects Buescher Hall and the Donald D. Shook Student Center. The new structure will have a life expectancy of over 50 years.

The bridge will cost approximately $1.5 million and construction will be funded with federal dollars earmarked for the maintenance and repair of campus facilities.

According to ECC President Dr. Jon Bauer, bids will be sought early next year, and construction would likely start in the late spring of 2022 and continue through most of the 2022-23 academic year.