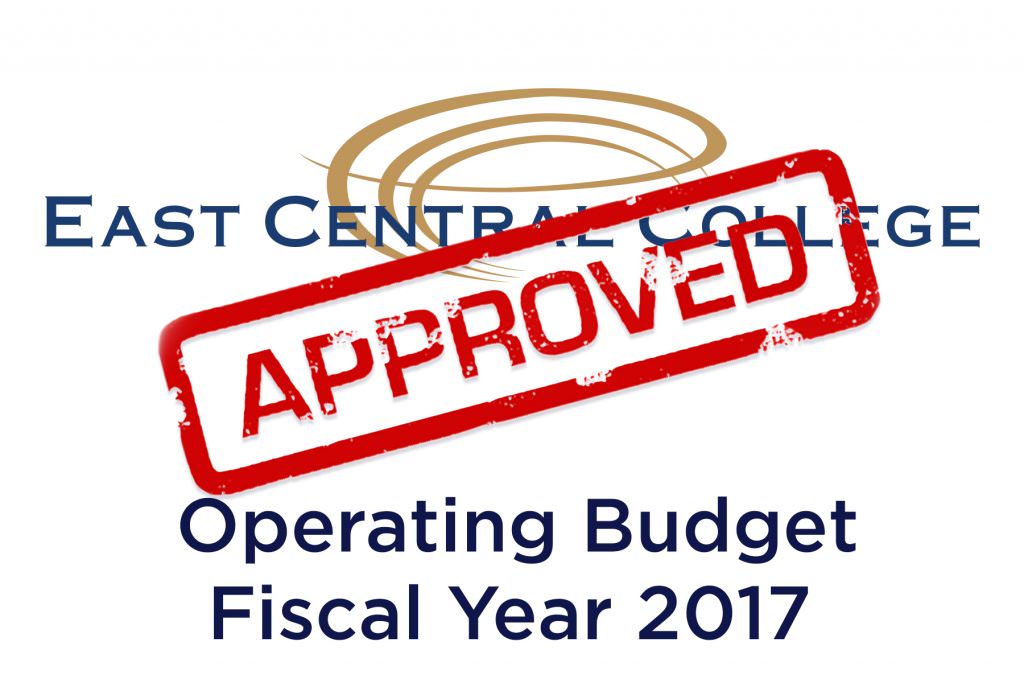 East Central College trustees approved an $18.5 million general operating budget for the new fiscal year that begins July 1.  That represents an increase of slightly less than one percent in the general fund over the 2016 budget.

In presenting the budget to board members at their June 20 meeting, Phil Pena, vice president of finance and administration, noted that development of the budget for fiscal year 2017 required balancing the needs of students and the community versus revenue growth.

The college derives over 99 percent of its revenue from three sources:  tuition and fees, state aid and local tax revenue.  “In putting together this budget we expect a 4 percent increase in state aid, but little  growth in local tax revenues.  Revenue from tuition and fees should be less since we expect a 4 percent drop in credit hours,” Pena stated.

Tuition and fees account for 33 percent of the total budget.

East Central College students will not see a tuition increase for the coming year.  Last year the college implemented a two-tier tuition model.  Students in four career-technical programs at ECC pay more in tuition due to the higher cost of operating those programs.

Pena noted that a $4 per credit hour security fee will go into effect this fall to support the new on campus police presence and security enhancements.  The fee will only be assessed to students who attend classes in person on the main campus or a satellite location.

Little or no growth is expected in local tax revenue.  The 2016 assessed valuation decreased 2.3 percent over 2015, keeping the rate ceiling at the maximum authorized levy of $0.37.  Local revenue represents the largest source of revenue for the college at 34 percent which is down .4 percent from the current fiscal year.

The FY ’17 staffing plan includes two new full-time positions bringing that total to 211.  A full-time emergency medical services clinical instructor has been added along with a technical support technician in Rolla.  New part-time positions include a volunteer coordinator for the Adult Education and Literacy program and a custodian.

Salaries and benefits account for the largest share of expenses for the college, totaling 75 percent of general fund spending in the upcoming fiscal year.  The 2017 budget also projects a five percent hike in medical insurance costs.

In addition to the general operating fund, the college has four other funds necessary for college operations which brings the total working budget to $38.8 million.  The college restricted programs fund has expected revenue of over $1.57 million for next fiscal year.  It contains money from credit hour fees that are used exclusively for the purpose for which they were generated.

The debt service fund is expected to collect $1.44 million from local property taxes.  These funds will be used to fulfill the college’s bond obligations.  The auxiliary services fund supports college operations such as the cafeteria and bookstore and projects more than $2.06 million in revenue for the upcoming year.  Government restricted programs, which includes students grants and loans, total over $15.2 million for fiscal year 2017.