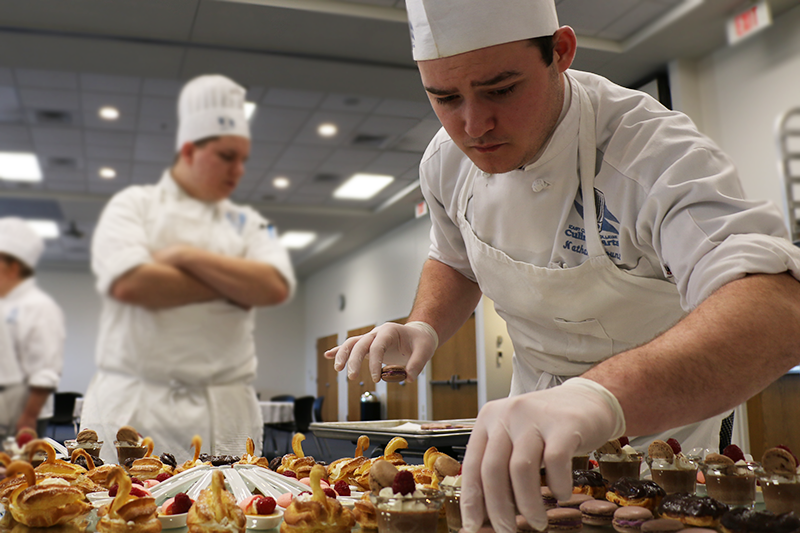 He graduated from the East Central College Culinary Program in 2018, and Nathan Yount is already making a name for himself. Yount spends his days working under award-winning chef Paul Kampff at the St. Louis Country Club. Outside of work, he is an active competitor in culinary competitions.

“I love the pressure of the kitchen,” Yount said, “especially a competition kitchen.”

When he was selected to participate in the 2019 National Jeune Commis Competition in Pittsburgh, Pennsylvania in June, he was taken aback.

“It was like nothing I had ever done before. You have to do a three-course meal from a mystery basket that can consist of anything,” he explained, “but every competitor gets the same basket and you get thirty minutes to write out a menu you want to prepare. You then have three and a half hours to cook it.”

“The competition is organized by the Chaîne des Rôtisseurs organization, which is the oldest food and wine society in the world. It’s a great honor to be selected to compete,” said Chef Mike Palazzola, East Central College culinary program coordinator. “Competitions of this magnitude require the highest standards of culinary skill and execution of dishes.”

Yount said he understood what was at stake and used his knowledge from East Central College and his real-world experience to create something impressive and unique. When he got his basket at the competition, he got to work.

“I got parsnips, hickory maple syrup, trout, a two pound strip steak, granny smith apples, and hog jowl,” he said. “For my first course I did a hickory glazed trout with celery leaf and apple slaw, sautéed Bok Choy and a lemon buerre blanc.”

It only got better from there.

“For my second course, I did a roasted strip loin with parsnip puree, glazed carrots and parsnips, a braised potato with a hog jowl ragout and a red wine reduction,” he said. “My dessert was a glazed chocolate Bavarian with an orange sponge cake, a marinated fruit salad, raspberry sauce and strawberry sorbet.”

The judges were impressed. He took home first place.

“When they called my name, I had a huge feeling of relief,” Yount said. “It was a feeling like ‘this is why you cannot ever give up on yourself. You always have to push through.’ All of my hard work had paid off. When I walked across the stage to accept my award, I felt like a new person.”

“Nathan has incredible drive,” said Palazzola. “He was the type of student who would never shy away from a challenge. I’m very proud of this young man.”

He’s not done competing yet. Yount will now represent the United States in the International Jeunes Chefs Rôtisseurs Competition in Calgary, Canada in September. According to its website, it is “a challenging competition that helps the development of the young chefs by showcasing their talents and creativity in an international arena.”

“This will be my first time out of the country,” explained Yount. “I’m going to practice every second I get. It is truly the biggest competition of my life.”

“Getting to compete in this competition is an incredible accomplishment itself,” said Palazzola. “No one can ever take from you what you learn on a journey like this one. It sticks with you for life.”