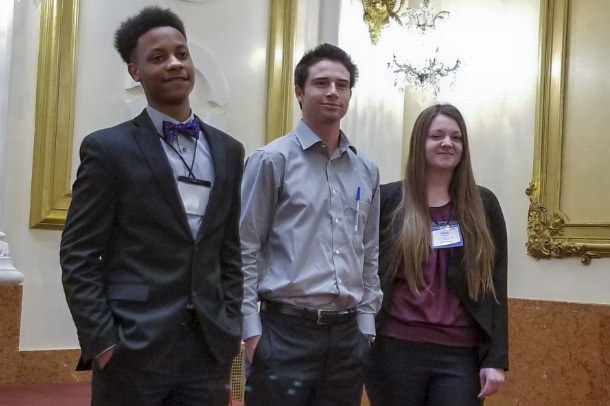 An Entrepreneur in the Making – Student Places in National Competition

Seeing the Empire State Building, Times Square, or Statue of Liberty can be an experience of a lifetime. It was no different for East Central College student Sara Hamer.

“It was an amazing experience,” the Labadie native said. “You see these places on TV, but you never think you’ll see them in person. It was a lot to take in, but overall it was amazing.”

Her trip to New York City wasn’t just about sightseeing. She was there to learn. Paying her own way, she attended the DECA Engage Conference in November.

According to its website, DECA “prepares emerging leaders and entrepreneurs in marketing, finance, hospitality and management in high schools and colleges around the globe.” It’s an organization Hamer was actively involved with in high school, and she wanted to continue her involvement when she came to East Central College.

“I wanted to continue DECA in college because I love it,” she explained. “I know it’s a great way to not only expand my knowledge but also make connections and get more involved.”

At the conference, Hamer was able to network with business professionals from across the country. She heard successes and failures from entrepreneurs and see business operations in action. She also was able to put her skills to the test.

“Sara entered the Entrepreneurship Business Simulation Competition at the conference,” said Steffani McCrary, ECC DECA sponsor. She traveled with Hamer on the trip. “She was paired with two other students, who she didn’t know, and they were given a task relevant to the category.”

Hamer’s team had to navigate through the fashion industry. In their simulation, a large retailer was doing poorly, and they had to figure out how to implement positive change. Her team beat out nearly every team competing – placing third in the national competition. “I was very surprised that we placed,” she admitted, “but in a really good way!”

McCrary knew she was up to the challenge. “Sara is a very dedicated and conscientious student,” she said, “Sara strives to do great in her school work and activities.”

Hamer plans to transfer to a four-year college or university after East Central College to continue her education in Business.