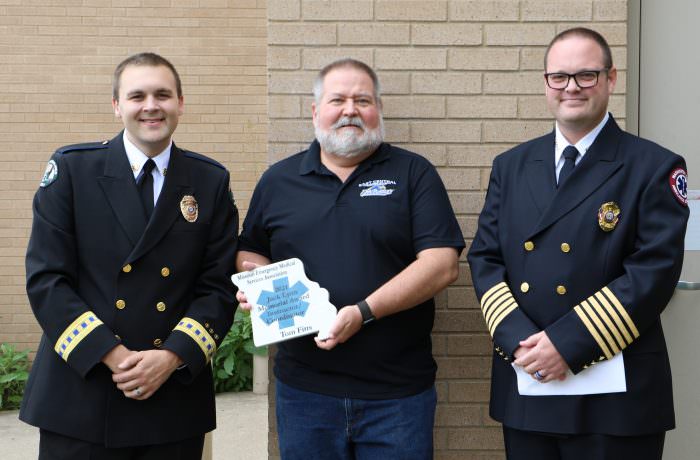 To anyone who knows Tom Fitts, it comes as no surprise that he would be recognized with a statewide award for his work as the EMS Program Coordinator for East Central College.

But Fitts, who is well-known and respected in the area’s EMS community, was caught off guard when friends and family gathered to present him the Missouri Emergency Medical Services Association (MEMSA) Jack Lyon Memorial, 2021 Instructor/Coordinator of the Year Award.

MEMSA Board President Justin Duncan and Board Member Joshua Krull presented Fitts with a plaque during a well-attended surprise ceremony last month.

“On behalf of MEMSA, congratulations to EMS Instructor/Coordinator Tom Fitts of East Central College,” Duncan said. “He doesn’t know the meaning of ‘quit’ and he doesn’t turn down opportunities to help his students be successful both in school and after licensing.”

The award presentation was organized by Fitts’s co-workers and family who managed to keep it a secret from him for nearly a month.

Fitts’ family attended the ceremony, including his wife, Janet. Together the couple have raised one daughter and two sons.

“I have known Tom Fitts for 20 years and he has been an active part of my professional growth as an EMS provider and as an educator,” she said.

“From the moment I was hired, he has consistently shared his love for our program and the institution,” Goodson added.

According to Goodson, Fitts has been a mentor to her and has patiently explained the accreditation processes, sharing a great deal of knowledge he gained through years of experience in the EMS field.

“Tom actively listens to my concerns and ideas about the EMT and Paramedic program, and he is constantly striving to better student success.,” Goodson said. “I would not hesitate in asking him questions regarding anything EMS-related.”

Nancy Mitchell, MSN, RN, director of Nursing and dean of health science, sent a letter of support for Fitts’ nomination.

“Tom’s dedication to his program and ECC is evident,” she said. “He is an ambassador for ECC and the EMS community.”

According to Mitchell, Fitts has worked tirelessly to provide a high level of education to every student in the EMS program

“Tom’s approach to classroom/lab teaching and learning is always outside of the box,” she said.

Mitchell noted that Fitts secured a used ambulance for the EMS program and he creates scenarios on campus to simulate real-life situations, such as cardiac arrests and car crashes.

“Students are then able to evaluate and treat those patients in the field just as they will in real life,” Mitchell said. “He brings the classroom to life in many ways.”

Fitts also has held many leadership roles in the EMS community and as a faculty member at ECC, including serving on the Meramec Ambulance District’s Board of Directors, past president of the ECC Faculty Association and ECC National Education Association (NEA).

In 1984, Fitts received his Emergency Medical Technician license while attending nursing school. He began working for Meramec Ambulance District and volunteered for the Eureka Fire Department.

After nursing school, he worked as a cardiothoracic nurse at St. Luke’s Hospital and then in the emergency room at St. Luke’s Des Peres Hospital, where he was head nurse. He also worked at Mercy Hospital Washington with his wife.

Fitts obtained his paramedic license and then started working full-time for the Washington Area Ambulance District. He also was helping his wife, who was the paramedic program director at ECC.

In January of 2002, Fitts was hired as the EMS Program Coordinator at ECC and occasionally assists with the nursing programs. Fitts continues to teach and be an advocate in the EMS community.